Parting thoughts on the 'Labbers' — or 'Blabbers' — on East First Street 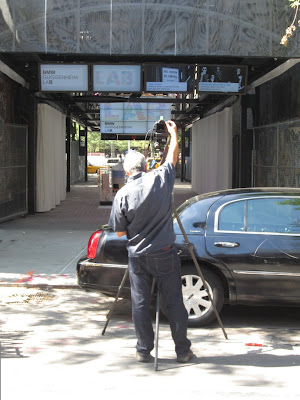 The presence of BMW Guggenheim Lab on my block has me asking a lot of questions about the role of corporate foundations in policy development.

Predictably, Labbers insist their corporate patron is enlightened, unselfish, benign. In my experience, corporate philanthropic activity is always closely aligned with business interests. Cultural and academic institutions have been colonized by corporate money in a way that makes it hard to view them as independent agents in service to the public good. Or have I just been reading too much Chris Hedges, watching too much Inside Job?

One Labber told me that as a European, she was familiar with public distaste for corporate sponsorship. She patiently explained that, while in many European countries the state supported the arts and culture, it was because Europe lacked a "culture of philanthropy," like the one we have in the U.S. She argued that private patronage of the arts was an age-old practice (I think the Medicis were mentioned), and that there is "good" corporate sponsorship and "bad" corporate sponsorship. Presumably, McDonalds and KFC (whose logos were ubiquitous in the film shown last Thursday, Jem Cohen's "Chain") are "bad" and BMW is "good." This looks like plain old luxury branding to me. In fact, the Guggenheim itself could be considered an upmarket chain.

And it wouldn't be such a huge problem if, say, BMW helped to pay for the production of a film series or a music festival that was open to the public. But the BMW Guggenheim Lab purportedly exists to explore solutions to some of the biggest challenges our society faces: basic resource and infrastructure use, political use of public space, how to prevent cities from being "segrified" (a BMW/Gugg neologism I believe is meant to include both the ideas of gentrification and segregation).

The BMW Guggenheim Lab defines itself is "Part urban think tank, part community center and public gathering space" Do we really believe that a privileged class of PhD candidates in the pay of a luxury carmaker are the best heads to put together on these problems? And do we really believe that this is a "community center," when the reality is that BMW Guggenheim bought their way into our community by paying to get rid of the rats that had long made the site uninhabitable (residents had no success over 20 years in raising money to do so.) Talk about privatization of basic services!

Judging from the academic jargon spoken here, the "community" being addressed is the international "creative class," whose interests may not be directly aligned with those of our local community, or in fact, 88% of the world. I hear no Spanish. I hear no Chinese. I barely hear English, I mostly here Academ-ese.

The Labbers (or as I like to think of them, Blabbers) seem impatient with criticism about corporate branding and sponsorship, rolling their eyes when another old codger from First St. rails against the corporate takeover. Most denizens of the East Village these days are merely looking for more edgy cultural experiences or products, and they seem to become as quickly bored with BMW Guggenheim Blab as I do. But the good folks of Berlin may give them more hell. I hope so.
Posted by Grieve at 6:50 AM

well said! sums it right up. thank you for posting this.

BMW came in and paid to get rid of rats that residents couldn't? What a terrible company...
This "lab" was no different than some hipster / yuppie gallery if you ask me, but come on, at least something good came of it. I'm just happy they didn't knock down a historic landmark to put this thing together - the space was empty. It was here, now it's gone, and the only difference is that there aren't anymore rats there, seems to me. So I can't fault 'em for that one.
As a last aside, BMW is based in Munich.

Do people really think this "lab" did anything to get rid of the rats? Come on. At best it just moved them 50 feet.

I'd have much less of an issue with BMW/Gug' if it didn't set up in a residential neighborhood that's in crisis. Why not the upper east side, hudson river park, or times square? Any place where it doesn't contribute to the onslaught of longtimer's displacement (ok, that might sound like a degenerative disease, but I'm at a loss for words).

I suppose it's true that the rats were displaced rather than completely removed. I'm not trying to defend the thing though - all I'm saying is, at least it wasn't permanent. It didn't directly affect rents and will leave no lasting impact (despite the mission statement). That's more than can be said about most other developments around here.

This is an excellent posting! While it's true that the physical BMW Guggenheim Lab wasn't permanent, what IS true is that the spirit if the thing will linger. It is part the movement to take what traditionally made our neighborhood special and make it more "palatable" for those who, shall we say, live in a more rarefied world. I believe that there must have been people involved here who were sincere, but we really have to ask: Why would BMW back this? Altruism? And the Guggenheim? Oh don't get me started!