Several years back when we posted about the new Lower Eastside Girls Club HQ on Avenue D, we sort of recall hearing something about an Airstream recording studio ... one of the many amenities such as a fair trade bookstore and gift shop, a library for after-school tutoring and a commercial kitchen and culinary training center. But we didn't give it much more thought.

Now let's fast-forward to this past Friday on Avenue D. 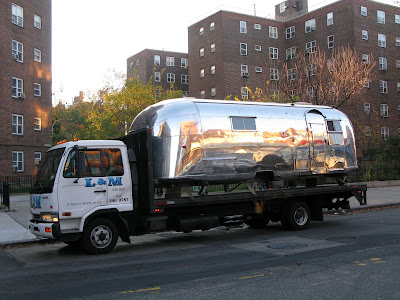 Girls Club Executive Director Lyn Pentecost passed along these photos with an explanation.

"The radio lab/recording studio in our new building will be housed in a repurposed '58 Airstream — on the second floor," she said.

And on Friday, workers brought in the Airstream ... which had to be installed inside the building before they closed up the façade ... 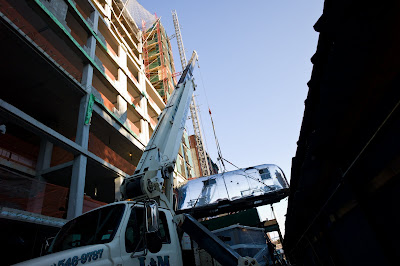 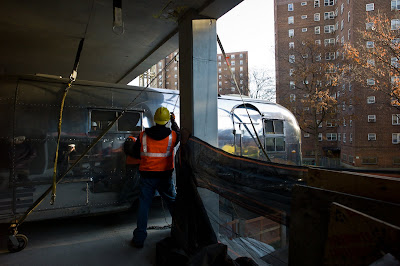 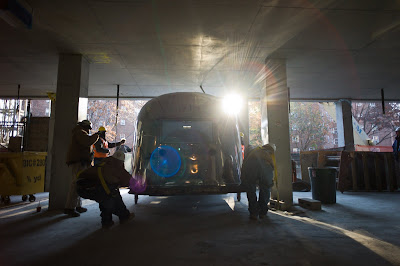 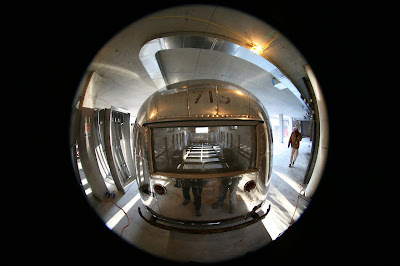 "The recording studio will be used to run a local digital radio station, produce youth podcasts and long-form audio pieces, and for classes in DJing and audio mixing," Pentecost said.

The Airstream recording studio is the brainchild of Dave Pentecost, Lyn's husband, who has more than 25 years of experience in television production and editing.

The Pentecosts have a summer cabin in the Adirondacks. Dave had apparently spotted it for sale at an old gas station nearby. "Quite the bargain, although we did have to gut it, reinforce it and put the shine back on," she said. "And then get it from there to here." 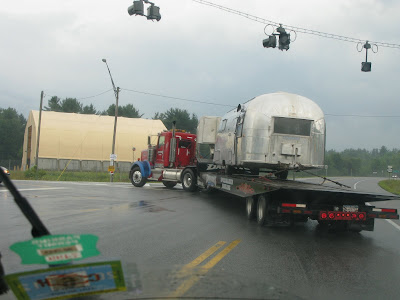 Say, I'm curious about the history of the Girls Club. I know it's been around since 1996 and am wondering if there were ever any offers to take over existing buildings in the area?

I'm also very interested in the housing component. Maybe someone could give us a break down of the apartments in terms of tenant income?

This is really dynamite!

That is the coolest thing ever. That's LES creativity and ingenuity right there! Congrats!

Very cool, indeed! I love the second to last photo.

And thanks everyone for your support and enthusiasm. Come by and see the Airstream - in about a year when it's all converted and we're up and running.

What a great idea!

And one last note - The great photos were taken by our friend Aaron Fineman http://www.aaronleefineman.com with the exception of the fisheye shot, which is mine. Cheers! Dave Pentecost

On The Girls Club website it says that there are going to be 78 units of mixed income housing. So 39 units will be market rate, 23 will be middle income and 16 low income.

Out of the 39 market rate apartments, how many will be one bedrooms, studios, etc. and how much will they rent for?

For the middle income apartments, same thing. How many one bedrooms, studios, etc. and how much will they rent for?

And for the low income units, the same. How many one bedrooms, studios, etc. and how much will they rent for?

Will the revenue generated from the market rate apartments be used to subsidize the rent for the middle income and low income tenants or will the revenues be used to pay for the cost of operating The Girls Club?

Were there ever any offers to take over existing buildings in the area to house the Girls Club before this location ?