So back in July we reported that the long-dormant pit also-known-as 427. E. 12th St. is primed for a six-story, 11-unit residence courtesy of Montreal-based architect Karl Fischer ...

Until that soulless glass coffin goes up, you have the chance to enjoy not one but two backhouses. In a post yesterday, Off The Grid — the blog of the Greenwich Village Society for Historic Preservation — wrote about the history of backhouses ... namely "residential structures which are separate from and located behind other buildings (usually, but not always, residential buildings) which face the street."

Here's a look at them via Google... 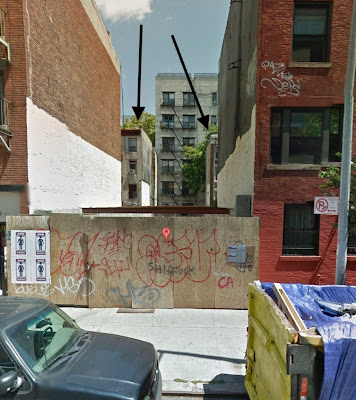 Let's go back to Off the Grid for more.

"The newly- (and temporarily-) revealed backhouses at 425 and 429 East 12th Street, between First Avenue and Avenue A, present a variation on these backhouse scenarios, one which we believe may be somewhat rare. The four-story front-buildings at 425 and 429 were both built in 1852, and appear to be very early, purpose-built tenements (i.e. they were built as tenements, not structures built as single-family homes which were converted to multi-family housing).

There's one between 1st and 2nd street also, accessible from 2nd avenue (east side). I always find it fascinating for some reason.

Thanks, Spike. Been curious about that one myself. Not to be TOO nosy, but do you enter at the buildings along 26 Second Avenue?

There's one on 5th St, btw 1st and 2nd Aves. Always wanted to see what was back there...

There are tons of these. A neighbor who lives in one across the street from me (it's a condo)told me they are called yard houses.

I moved out of 425r a year ago. It's definitely old, but the building is interesting. The entrance is a long white brick hallway into the court yard which seems right out of a war movie and there are big metal stars on the front of the building (not sure why). My floors were very old wide wooden planks. Downside was my shower was in my kitchen/bedroom/livingroom and I had to build counter space, but the manager and super are good people. Side note... I swear my apt was haunted as the bolt frequently unlocked in the middle of the night. Could have been my unassuming school teacher neighbor who told me about her 11th st vacant lot parties in the 60s... but that's a different story.

Thanks for sharing that! I like to think that the place was haunted!

Backhouse at 325 East 10th, too...the one that was just made over into an illegal hotel. I used to live in it...long ago.