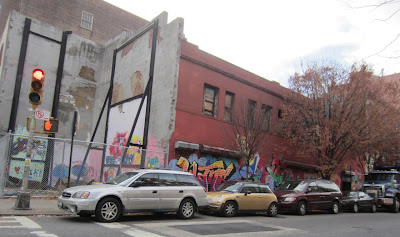 We've been keeping an eye on the long-empty 185-193 Avenue B for the past few years. The address was a movie theater for many years, first the Bijou in 1926, then the Charles. (The theater closed in 1975, and a church took over the space.) A fire nearly destroyed the building in October 2006.

There had been talk of fixing up the place for the tenant — the Elim Pentecostal Church. But those plans never panned out. In June 2010, we toured the space between 11th Street and 12th Street with the Rev. Carlos Torres. (See that post here.)

And to rehash from a previous post: He had plans to sell the space to a developer. The ground-floor would house the church and a community center. The upper levels of the new building would be designated for some combination of housing. Torres didn't have a timeline for any of this; and there seemed to be a lot of red tape involved in any plans. However, what was clear from the conversation: The building was beyond repair and needed to come down.

Yesterday, a few workers continued to haul out some debris from inside the building ... 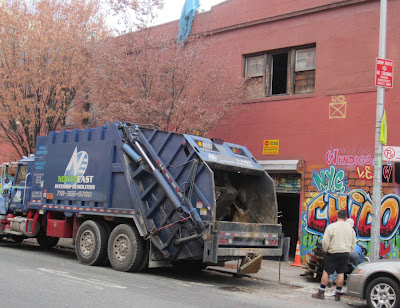 There is a demolition application on file already with the city (dated Sept. 20). And, according to the DOB, plans for a mixed-use seven-story building with 44 units were "disapproved" last Monday.

The DOB lists Conrad Roncati, CEO and principal of Architectura in Edgewater, N.J., as the architect. That firm's portfolio includes numerous mixed-use, commercial, residential and religious buildings. The Architectura site didn't include any renderings for this project.

We're waiting to hear what they next steps are here.

Former landmark countercultural theater now for rent on Avenue B
Posted by Grieve at 7:00 AM

Email ThisBlogThis!Share to TwitterShare to FacebookShare to Pinterest
Labels: 193 Avenue B, Avenue B

Guess what's not a high-rise?

My buddy used to park his camper in that lot. The stuff we and other people used to do in that camper is not appropriate for public consumption.

Let's hope its something modest, to offset that absolutely awful condo thing on the corner.

I've been inside several times recently -- that building is NOT beyond repair!! There are simply a few holes in the roof and on the second floor. The theater is intact. It's just old with peeling plaster and it's dirty. This place could be up and running for just a few 100k that could be covered by rental income from the three stores along Avenue B, but the Rev. doesn't appear to be able to deal with this. He seems torn between keeping the place as a church or selling it to a parasite developer.

I wish he would see the light and have this theater that his uncle gave him restored....it CAN be done!!

How do we get in touch with the Rev and convince him that the community could help him raise the funds to restore the theater. His other option might be to sell it to a not-profit low-income or homeless housing provide who could renovate the theater for the use of the church and the community while providing housing for people who really need it. Can someone provide his contact info?

catching up w/grieve
a hi-rise is anything taller than 6 stories.
i like guessing games too!