Checking in on @Jakobson_fix_it: 'so basically she has shit water in her apartment' 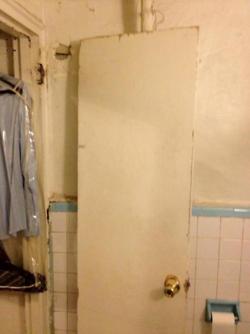 Two weeks ago, we posted an item on an East Village resident's campaign against Jakobson Properties. Tired of ongoing issues in a residential building, the tenant asked other Jakobson renters to take to Twitter with the complaints by using @Jakobson_fix_it

We wanted to check in to see how things were going. In the first week, the tenant noted that "Jakobson was really on it. They seem to react a lot quicker to maintenance requests, most likely because of this campaign. So we've had a few successes. We'll see whether this persists."

We've been monitoring the Twitter account as well as the Tumblr. Several past and present residents have chimed in... Here's part of an anecdote a current Jakobson tenant shared:

About a week and a half ago I get a txt from my roommate who came home late to water dripping from our ceiling. He put a bucket under it and i called the next day to have the guy come around to see what the hell was going on. We found out that the apartment upstairs toilet had overflown and the maintenance guy was actually standing in my “kitchen” on a walkie talkie and said “so basically she has shit water in her apartment” I mean WHAT?! I know its true but seriously. Talk about that with your friends later. He said he was going to fix the upstairs apartment and then fix ours at 3 (this was at like 11am) I had to leave so I told my roommate the maintenance guy never came back. Saw him in the stairs the next day brought it up again and he said that they were having a lot of floods. still hasnt been fixed.

Previously on EV Grieve:
Taking to Twitter to complain about the landlord
Posted by Grieve at 6:47 AM

wow. that is just SICK and SAD. these people need to be shut down.

Its really shocking the crap (no pun intended) people have to deal with in these old apartments that in any other city would be condemned. Im sure that apartment has no ventilation system, as most dont, so theyre just breathing in shit air. So disgusting.

Just followed them on Twitter and will retweet to spread the word.

Are you guys paying rent? And if so, why don't you move to an apartment that isn't so disgusting?