About the Boiler Dilemma 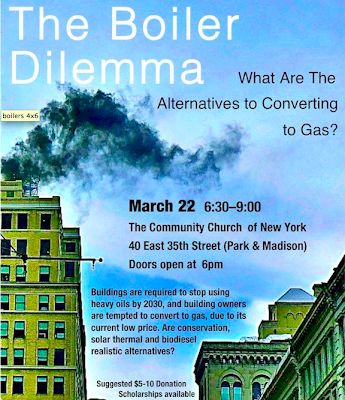 Beware — The push is on right now to get all buildings in NYC to convert their boilers to Natural Gas.

Don't let this happen to your building! As we all know, East Village buildings are increasingly populated with at least a few, and usually with a majority of young business-oriented tenants with a strong sense of entitlement who care little about the future of the neighborhood. When decisions are made about the maintenance and preservation of their buildings, the only criteria they consider is immediate cost, convenience and mainly the future sale price of their domiciles.

ConEd is giving New Yorkers the option to switch to #2 heating oil boilers — OR offering substantial discounts for conversion to gas burning boilers. Both options continue our dependance on the use of fossil fuels. There ARE alternatives, but ConEd and Bloomberg are both pushing natural gas. ConEd is the sole supplier as well as deliverer of gas — unlike the current heating oil or alternatives, so the switch to gas will add billions to ConEd and Oil and Gas Corporations' already outrageous profits.

The City’s new heating oil rules require buildings to stop using heavy oils by 2030, (and if your boiler uses #4 or #6 oil, you mush switch soon). Building owners are tempted to convert to gas, due to its current low price. But what is the true cost of “cheap” gas, when fracking could ruin our air and water, and bring radon-laden shale gas to our stoves? Are conservation, solar thermal and biodiesel realistic alternatives?

Email ThisBlogThis!Share to TwitterShare to FacebookShare to Pinterest
Labels: ConEd

Wait, Im not very educated on this issue, but arent the boilers using heating oil now? Isnt that bad for the environment, and a product we must import for the most part? My gut is to say fracking is bad, although I know very little about it, but its not like the alternative is perfect.

Nevermind that natural gas is one of the United States' most abundant natural resources. And, it burns much more cleanly than heating oil (or gasoline, when it's used in current automotive applications).

"As we all know, East Village buildings are increasingly populated with at least a few, and usually with a majority of young business-oriented tenants with a strong sense of entitlement who care little about the future of the neighborhood. When decisions are made about the maintenance and preservation of their buildings, the only criteria they consider is immediate cost, convenience and mainly the future sale price of their domiciles."

I'm not sure how these sentences help their cause.

I pray for my building to convert to natural gas. At least 3 times this year we ran out of oil so we had no heat and hot water.

I think my landlord has already converted our boiler to a lump of inert metal, since most of the time we have no heat or hot water.

These people completely misunderstand the issues. I'm part of a coop that converted to a natural gas burning boiler several years ago, and it is healthier for residents and better for the environment because it's cleaner burning, more convenient because the gas runs directly into the building, cheaper to operate (in part because of the subsides but also because our natural gas boiler is newer than our oil burning boiler was, and runs way more efficiently), and more reliable. Fracking is not the only source of natural gas, and as another commenter stated, it's among the United States' most abundant resources. I've looked into other options, and I can tell you right now that they are not realistic options. Solar water heating, especially for a large building, simply cannot keep up with demand. The doubling of boilers in NYC buildings to provide (pretty efficient) hot water heating makes it totally impossible. Solar water heating simply doesn't end your dependance on a boiler. Biodiesel is also not a realistic alternative, not just because of the expense of the materials, but also because biodiesel conversions are not particularly clean burning, leading to the accompanying negative health implications and environmental concerns. Finally, conservation is a great and worthy goal, but it doesn't keep people from needing hot showers, or obviate NYC laws regarding providing heat to apartments during the winter. Since we can't eliminate our dependance on oil entirely right now, we should use the best and cleanest currently available alternative: natural gas.

That being said, I do think that opposing fracking is reasonable, but that shouldn't prevent you from using natural gas altogether. We should reform the process, but we should also embrace the positive health benefits that we can derive from switching from oil to natural gas. After all, no one is suggesting that we stop using our natural gas stoves, or that we stop eating at eateries that cook with natural gas. It's simply not reasonable to do so.

Given the choices we're presented, to either continue using oil in spite of the deleterious health, environmental, and efficiency issues, or switch to natural gas while also working to reform the process by which a very small percentage of natural gas is removed from shale, I'll go with the natural gas.

Do not for one second underestimate how disasterous and destructive the upstate fracking is. How you noticed in the past few years a slight off taste to your water? THAT IS CHEMICALS FROM FRACKING. NYC has long prided itself on having the best drinking water in the country. SAY GOODBYE to drinkable water if these money-hungry bast@rds have their way. not to mention the obviously inherent dangers of drilling into the core of the earth to try to relentlessly suck out money. a LOT more can go wrong then losing good quality drinking water. BP ANYONE???
People - water is everything - water is LIFE - don't be f*cking stupid please!!!
SAY NO TO FRACKING AND NATURAL GAS EFFORTS, for yourselves and for the planet...
Just google it if you don't know what this is all about. Thanks.

Burning heating oil is much worse for the environment, for your health, and for your budget.

This email couldn't be more off point.

My sense is that this message has something to do with frack-fear. It's quite misguided, in my opinion, and exactly the wrong thing to do....

Ok, so Im not the only one then... Heating oil doesnt come from angels sneezing...

Con Ed still owes the EV a bunch in reparations from us taking on the burden of electrifying half the city after they shut down the midtown plant. At the time of the conversion, around 2000 (I think? I'm too lazy to look it up) they paid for (supposedly) cleaner burning oil boilers for buildings impacted by their new pollutants of fine particulates that increased a trillion fold (or something less exaggerated than that). More info here: http://www.nyc.gov/html/mancb3/html/conedison/conedison.shtml