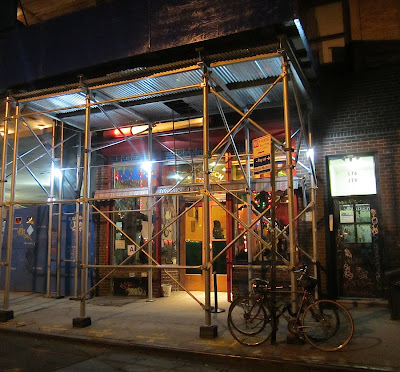 Yesterday, in Part 1 of our feature on Ulli Rimkus and Max Fish, we learned that the bar is safe for now on Ludlow Street... we also looked at the art scene that eventually helped lead to the bar's creation in 1989... You can find Part 1 of the post right here.

Meanwhile, Uptown
At the same time, other members of Colab, including Rimkus, Kiki Smith, and photographer Nan Goldin were trying to make their way in midtown, peddling libations uptown at a bar called Tin Pan Alley, owned by Maggie Smith since the 1970s.

Photographer Keri Pickett, a longtime patron, called Tin Pan a place where “artists mixed with locals, where scores of young musicians performed ranging from jazz and samba to punk rock.” 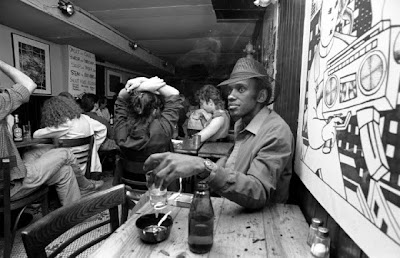 Rimkus was a bartender at Tin Pan, as was Goldin, and Smith worked in the kitchen. Charlie Ahearn, who lived in the neighborhood at the time, used to hang out there and remembered the place as a kind of “tough girls environment with many strippers and street walkers drinking along with artists, musicians, drug dealers, and city detectives.

Like The Times Square Show, there were events nightly, such as film screenings and punk shows [that featured bands] like the Butthole Surfers. [Rimkus] was at the center of it all, graciously showing interest in her friends’ work and in the artists and musicians [who frequented the establishment].”

As it turns out, all of the work at Tin Pan and Colab was the perfect foundation for Rimkus, who took all that experience and used it to open Max Fish in 1989. The name came from the property’s former tenant, Max Fisch, a Jewish man who sold Judaica. Prior to obtaining a liquor license, Rimkus did what she had always done: She mounted an art exhibit, The Atomic Art Show. 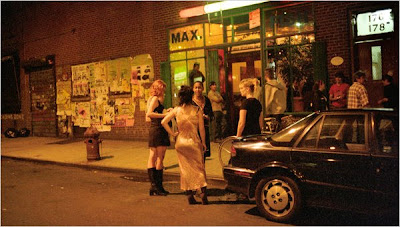 “I wanted to have a place where people [could] come and hang out — not to get drunk, that was never the point,” Rimkus told Time Out New York. “The artists played a very important role in this place. We were hosting art shows before we even started the bar.”

Some Assembly Required
By their very nature most artists are anti-social, but put them all in a small room together and it’s like igniting a rabid fire. Fran Lebowitz said it best when she said “the history of art is people sitting around in bars, talking and drinking” and Max Fish certainly became a testament to that idea. It quickly made its name both for its colorful ad-hoc art shows and for launching more than a few careers.

The shows continued. Over the years the bar remained a busy, popular LES hangout. Throughout the 1990s, everyone from filmmaker Jim Jarmusch to actors and personalities Johnny Depp and Courtney Love were regulars.

Artists remained at the forefront and by the turn of the new millennium, newcomers like Dash Snow, who in 2009 was found dead of a drug overdose, called Max Fish home. Snow, along with scores of others including photographer Ryan McGinley and artist Dan Colon, had inadvertently become part of the inner circle. The baton passes to a new generation, but Rimkus is still at the helm.

What has changed is that the very bar that helped remake the LES is a potential target in the ever-tightening grip known as gentrification; Rimkus faced similar problems in 2010.

“Gentrification was always a thing on this block,” Rimkus told New York magazine. “I moved here years before I opened the bar. It was all Hispanic families and whoever used to be here and then moved because more and more white people moved in. And now we’re [in danger of] being kicked out [again] … there’s three different high-rise buildings next to me.”

Despite a steep rent increase, Rimkus is hanging on.

As the LES gives way to fancy condos and glass skyscrapers, due in part to zoning changes by Mayor Bloomberg, fans of the bar hope it will stay another 20 years.

To lend their support, they have signed a petition. At last count, the number of signatories had reached into the thousands, many of hom added words of encouragement, such as those from patron Shalie Sweetnam, “Max Fish is one of the many elements that personify the color and camaraderie of the LES ... it should be respected for that in a climate that increasingly and sadly values gentrification and homogenization over history and character.”

Joann Jovinelly is a freelance writer and photographer who still calls the East Village home. When she's lucky, she sells her work and pays the rent. She knows about the Times Square Show because she lived and worked with Charlie Ahearn and Jane Dickson in the late 1980s and they told her all about it, among other things.

Find more photos by Keri Pickett at Tin Pan Alley Live.
Posted by Grieve at 7:00 AM

THANK YOU JOANN!!!
These articles have been extremely thorough, informative and an all around nice read.

This was a great story and a nice slice of history. Wonderful work, Joann and thanks to EV Grieve for posting it!

I love these articles. Thanks for running them!

Great stuff, Joann. I remember Tin Pan Ally most for a reading there by the terrific poet/man about town Max Blagg.

Thanks so very much for all the kind comments. As a freelancer who often ghost writes for others, I can't tell you how much they mean to me. I should also thank Charlie Ahearn who was kind enough to answer my questions, and Ulli, for letting me snap a ton of pictures in her bar. Max Fish is still very much an ongoing art exhibit, as new and permanent works are showcased all the time. If you've never been, go in and check it out. If you haven't been in a while, stop in and say hello. The people are really nice, down to earth, and approachable and the beer is cheap. Thanks again for being so hospitable!

Two of my favorite Keri Pickett photos (for personal reasons)

Great to see this historical excavation beginning... And glad that Max Fish remains as fresh as the last cracked-open beer -- as long as it does, of course. It's hard for me to talk to the young punks crowding in there, but I'm happy that they are all still watching the TV monitors over the bar. Those came from our MWF Video Club project at the very start of the bar, our ex-show monitors, along with a collection of artists' videos Ulli bought for the bar. Hail Panasonic, irradiating since 1986. The MWF Video collection is still on tape, moldering in storage -- http://www.brickhaus.com/amoore/orig-index.html

Hello, interesting article about the past and history. Do you know if Maggie Smith is still around?