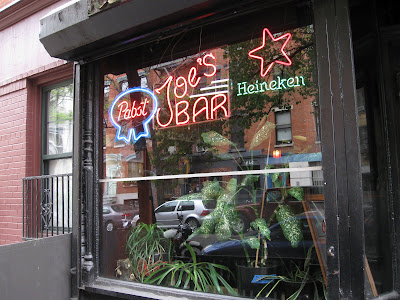 Only one item to note from tonight's CB3/SLA committee meeting... we understand that the committee has approved a license for Josie's to open in the space that last housed longtime favorite Joe's Bar on East Sixth Street between Avenue A and Avenue B.

Richard Corton and his business partner Kirk Marcoe, who own Mona's and Sophie's, signed a lease and sales contract for the space last month. Proprietor Joe Vajda, who opened the bar at this address in 1973, died last November. (Joe's longtime partner Dottie requested that they not use his name for the bar.)

Corton has said that they aren't expecting to modify much about the space. Corton and Marcoe are eyeing a July opening.

Previously on EV Grieve:
Joe's Bar is joining the Sophie's-Mona's family
Posted by Grieve at 9:36 PM

Great news! Can't wait to have a beer there in July!

I am glad to hear that Rich and Kirk were approved. They worked hard to get this area approved to open and run it the way it used to be. Also, good luck to Dottie and RIP Joe who did a great job with the bar all these years. They were great people who cared for the customers. Unfortunately when Joe got sick, it became harder and harder to keep things the way they were but he died trying. There are many happy memories for me and my family at that bar including the "free" New Year's parties which many of the old timers should remember. Great times in the past and many great times to come in the future. Good luck to all involved and glad to see the legacy of keeping a dive bar going strong is happening. Much good news!!!