How much longer will the East Village have gas stations?

On Sunday, the Post had two articles about landmarking under the Bloomberg administration. One article points out that the BP station on Houston and Lafayette is in a landmarked area. And that's a problem for station owner Marcello Porcetti, "who hoped to turn his 11,000-square-foot lot into a seven-story condo development." 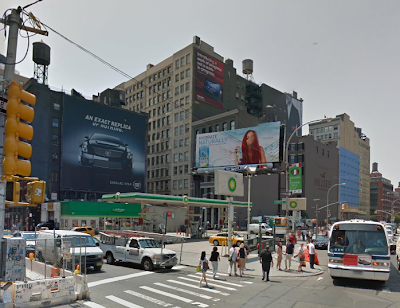 As the Post notes, Porcetti is angry because he can't sell it for big bucks to a developer. Now he'll have to jump through a lot of hoops to get anything done here.

This made me wonder how much longer the East Village will have any gas stations, now numbering two... at Houston and Avenue C... 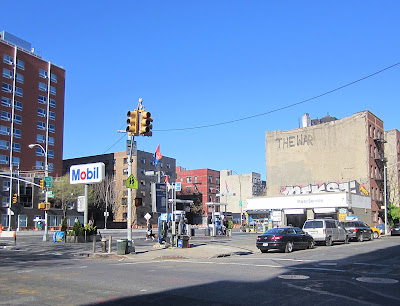 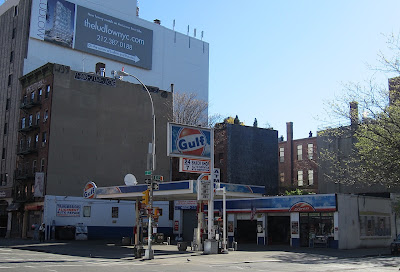 According to an article last fall at Crain's:

Gas stations are nearly facing extinction in Manhattan after years of sell-offs and closures. Just last month, the Lukoil station on West 13th Street and Eighth Avenue shut its mini-market doors and plugged its pumps. That leaves a mere 41 stations on the island, versus 58 two years ago, according to the Department of Consumer Affairs. The city's five boroughs host 835 locations in all — meaning Manhattan's share is less than 5%.

Now I'm not lamenting the loss of gas stations... I don't have a car... and, even with an occasional rental, have never used either East Village gas station... I'll echo the sentiments of Jeremiah Moss on the matter: "And while I'm not a fan of oil, I like gas stations for their smudgy, blue-collar existence, and their vanishing from the face of Manhattan is worth noting."

Anyway, there's always the what replacing the gas stations that prompts some unease — usually something glassy and expensive ... like here on Avenue B and Houston, where Gaseteria closed in 2005 (look at the price of gas!) ... 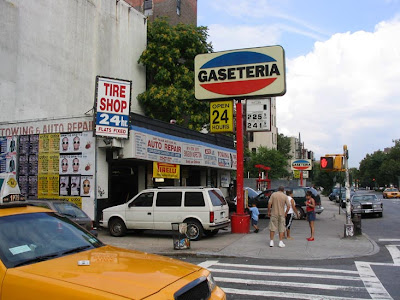 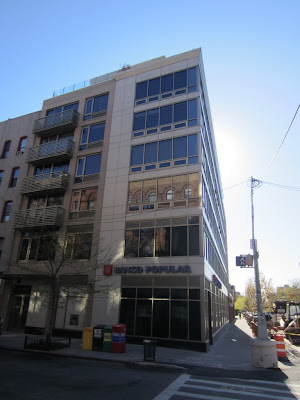 As Faith Hope Consolo, chairman of retail leasing at Prudential Douglas Elliman, told Crain's: "Gas stations ... just make so much sense. You don't have to empty tenants out of a building. You don't have to buy people out. You just have to acquire the land."
Posted by Grieve at 6:50 AM

I haven't bought gas or driven for over 18 years, but I sure like the looks of that corner with Gaseteria on it a lot better than the high-rise building.

How did you manage to get a picture of the Gulf station without a ton of cabs?

I don't have a car, but isn't it going to become an issue at some point for people who do have cars? Is everyone going to realistically be able to drive out of Manhattan just to get gas? This is what gets me about the High Line, too. These developers are pushing out all of the garages where people get their cars fixed. Soon, you are literally going to have to go to Jersey to get your car fixed. I am surprised car owners aren't more up in arms about this.

I'm kinda shocked that there are 41 gas stations in Manhattan. I can't name more than 6 or 7 below 96th street. It's not a huge deal, since when I drive it's usually out of Manhattan, at which point I can hit the cheaper gas in Jersey or Brooklyn or Queens.

Hope the one on 2nd Avenue holds on. Best. Bagels. Ever.

For instance, a former BP Amoco station at 236-250 Atlantic Avenue, a prime location in Brooklyn not far from the Brooklyn Bridge, that sold in May might have gone for $1 million to $2 million as a gas station. Instead, it sold for $13 million as a residential development parcel, Mr. Dario said. The owner plans a mix of apartments and stores on the site, which covers more than 28,500 square feet.

"That's one of the only spaces on the Atlantic Avenue corridor with a large amount of retail space available, so it will probably go to one of these national retail companies," said Mr. Dario, whose brokerage firm is marketing the prospective retail space. "It's going to be a nice attraction on that corner."

Nice attraction, my ass.I hate this kind of stuff, plus all the auto businesses dying near me. What a sterile landscape emerges.

The (only?) one I like is at 96th Street, west of West End, which we use when returning a rental car. And it's built in as bays to a mechanic's shop, underneath an existing building.

I will be the first one the step up and lament the loss of gas stations in the city.
Having gas stations (and bookstores and barbers and drycleaners and hardwarestores) will keep manhattan fucntioning as a REAL city for the 8+ million of us who LIVE here, not just a fake plastic LEGO city for the 50 million tourists we so pathetically cater to every year.
I especially love the one on ave C and houston where it says THE WAR on the wall behind it.
THE WAR, indeed.

I'm not sure I lament anything here other than the craptastic structures being put up. There's really no reason for a gas station anywhere downtown -- anyone who needs gas is likely going to be heading out of the city. Much more realistic to plan a pit stop on the way out of town once you are out of town. Gas stations make for very scary car/walker interactions.

I live and drive here every day. It'll just be one more thing that makes it a challenge to live here. Then again, it'll also be her another excuse to jam out, drive a bit and gas up at quieter taxi-free location, with a self wash thingie and better snacks. Please. Who cares.