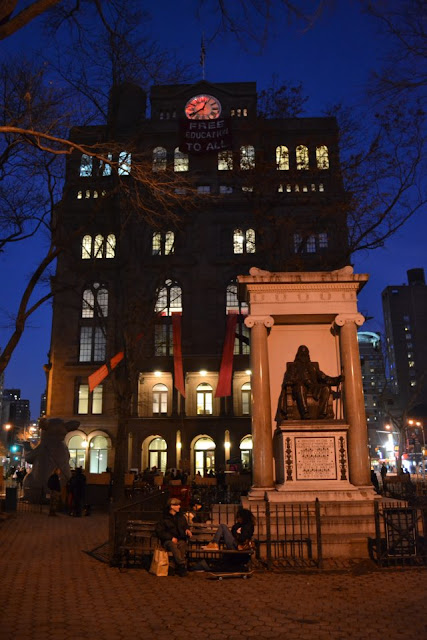 We, the Students for a Free Cooper Union, who reclaimed The Peter Cooper Suite from the current Cooper Union administration yesterday at noon, have established base overnight. We will continue holding this space until our demands are met or we are otherwise removed: we will not negotiate.

To this point we have publicly presented our terms and principles and reached out to the broader community and press, but we have yet to be contacted in any capacity by the president. Faced with ideological opposition to the expansionist model, Jamshed Bharucha has withdrawn from public view and shirked his responsibilities overseeing the college.

We denounce our president’s repeated absence in the face of community organizing. Last year, while the New York City Police Department arrested our students, our administration was nowhere to be seen; and chants of “Where is our president?” still echo today. We need transparency, not invisibility. In contrast, the public has come together in support of our principles and demands. Displays of solidarity — from tweets all around the world to a candlelit vigil eight floors below — resonate our rejection of the global system of student debt and articulate aggravations that are felt worldwide.

Yesterday, an anonymous source shared a report with us detailing the results of a committee convened to analyze the feasibility of implementing undergraduate tuition in the School of Engineering. The research concluded that within 10 years, students could face between $40,000 and $80,000 in tuition fees.

Since we received and shared this document, other members of the community have stepped forward to clarify the nature of the report. It is our understanding now that this committee was one of many tasked to research revenue generation for the school. We struggle with the fact that all of this information has come to light solely from a leaked document, and not the from our expectations of transparency and candor.

In response to the undervaluing of student voices and the continuous dismissal of community organizing, Students for a Free Cooper Union are holding a press conference on Tuesday, December 4, 2012 to address the aforementioned points. We are organizing our fellow students as public intermediaries to speak on our behalf while we retain the Peter Cooper Suite.

We invite everyone to this press conference in front of Cooper Union at 7 East 7th Street at 2:30 PM

The New York Times had more on the story here yesterday.

Previously.
Posted by Grieve at 6:45 AM

What a joke. The school isn't a charity .. if the endowment can't keep up with student costs they are going to have to start charging tuition or shut down. Either get active in encouraging alumni to donate more to preserve the ideological model of a "tuition-less" school, raise the money yourselves, or stop complaining.

Welcome to the real world, you entitled little shits!

they could sell some of their real estate holdings including the house on stuyvesant street that the give as a deans residence.
they replaced their bowery engineering building with a monstrosity.
they own the land under bowery bar and the chrysler building.
they are building a gigantic AWFUL building on astor place, on city land that they pay NOTHING for.
why shouldn't they be required to live up to their founding mandate of free quality education?

Some of the students that are part of this Occupation have been doing hurricane relief work with Occupy unlike I am sure people who call them "little shits". Bet you Yuppie right wing jerkoffs never thought of doing things like that. A Class War is coming Yuppie Scum .. Choose your side and keep your powder dry.

I was always under the impression that the virulent opposition to the B&T folks, the "fratty douches", etc... was because of a desire, in large part, to preserve the progressive, leading edge (in the arts, philosophy and social activism) mentality of the community. But rather it seems that it is just because some of these posters are curmudgeons, who just want to hate something, anything. It's very unbecoming and, honestly, not altogether surprising.

It is hard to tell how much overlap there is between these two posting groups because how the posting system works (as I also post as "Anonymous"), but it is interesting nonetheless.

Free education the Utopian dream but then again all dreams come to an end. There are generous student loan programs and of course "working". I had the "GI Bill" of the Vietnam era it paid next to nothing I did it with student loans and loading trucks at UPS on the night shift. I saved for six months to afford my class ring which I still wear with pride. There is something to be said for If its worth having it's worth working for. Our you could ask your parents for a loan now that's a 1 per center solution

Cooper sold that property on astor place. That building has nothing to do with Cooper Union.

The school gives full scholarships to every student, which is very different from it being a "charity."

$300,000 has been pledged through alumni and CU associated fundraising efforts-- if the school remains tuition free.

But relying on alumni donations alone is unsustainable.

Most of the issue lies in some very bad decisions made by past administration... which chose to satisfy personal greed over maintaining the ideology of the school.

So now the students are being punished for the mistakes and greed of a few...

The founders of the school had a mission to provide free tuition. This school is simply mismanaged. Have you seen that new building- was it necessary if they had no money?
They surely have other options, but are taking the easy, greedy way out- ending an 110 year tradition because of laziness and lack of creative solutions.
This is not NYU or Harvard- this is a school that is famous for being free to those who make the cut, just as scholarships are free to those who make the cut.
Free Coooper Union! Solidarity!!