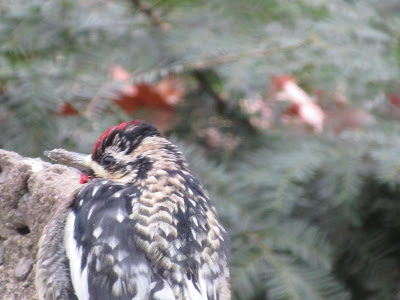 [A Yellow-bellied Sapsucker spotted in the East Village]

A group of East Village residents recently took part in a bird count in the neighborhood. Here’s their story via EVG reader Patrick:

We were inspired by annual bird counts that have occurred for more than a century in New York and, now, all over the world. We gathered in Tompkins Square Park and then spread out to cover the community gardens and other areas of the East Village.

Overall we counted 1,567 individual birds, representing 16 different species. Highlights included a Peregrine Falcon on Meltzer Tower, two Yellow-bellied Sapsuckers in Tompkins Square Park, and an American Kestrel perched on a building at the corner of Seventh Street and Avenue A. We also saw Christo, the resident male red-tailed Hawk in Tompkins Square Park, along with “Nora,” the new visitor, and another juvenile hawk.

Thanks to everyone who participated: Steven, Donald, Florence, Dennis, Cheyenne, Laura, Jeff, Greg and Elias! 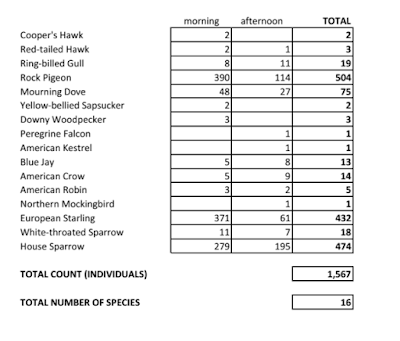 Email ThisBlogThis!Share to TwitterShare to FacebookShare to Pinterest
Labels: birds

Well done! And thank you, an apropos article to read as the birds are in great voice now on a calm Sunday morning.

This scientific study was initiated and organized by Elias, an expert birder who is seven years old.

If you had visited my backyard you would have seen a pair of Cardinals. They come to peck on my decaying pumpkins trying to get the seeds they love.

I can remember when you would mostly see flocks of starlings in Central Park, now they are everywhere. That the starling population in TSP is almost as large as pigeons is not surprising. They were introduced into New York in 1890 when an eccentric bird lover imported 60 of them from England and released them in Central Park. Today there are 150 million of them here, from Alaska to Central America. They are now considered one of the most destructive invasive species in the country, killing trees, crops and people when their flocks fly into the path of airplanes, or spreading fungal lung disease through their droppings, and spreading lice, fleas and ticks. The NY Times did a nice piece on our second most favorite invasive species:

100 Years of the Starling

Today the starling is ubiquitous, with its purple and green iridescent plumage and its rasping, insistent call. It has distinguished itself as one of the costliest and most noxious birds on our continent.

Roosting in hordes of up to a million, starlings can devour vast stores of seed and fruit, offsetting whatever benefit they confer by eating insects. In a single day, a cloud of omnivorous starlings can gobble up 20 tons of potatoes.

In 1960 a Lockheed Electra plummeted seconds after taking off from Logan Airport in Boston, killing 62 people. Some 10,000 starlings had flown straight into the plane, crippling its engines. Any bird in the wrong place can pose such a danger, but it is the ever-present starling that pilots fret over the most.

As usual in the history of man's importation of species across oceans and continents, Schieffelin was not thinking of long-term consequences. For the first six years after he released his birds they rarely strayed beyond Manhattan. The first nesting pair, discovered in the eaves of the Museum of Natural History, across the street from Central Park, inspired jubilation.

Once the starlings began to spread, though, their numbers and range soon exploded. They were able to adapt to climates as varied as Alaska's and Florida's; they were willing and able to eat anything; and they reproduced with startling vigor. ''Starlings,'' one ornithologist wrote, ''do nothing in moderation.''

By 1928 they were found as far west as the Mississippi. By 1942 they were in California. By the mid-1950's they numbered more than 50 million. Schieffelin's mission had become more appropriate to a work of Hitchcock than of Shakespeare.

I saw a hawk when I rode by Tompkins a few weeks ago. It was perched on a fence by Ave A just hanging out. I think it was Christo.

It was like wanted to be photographed. Like he was striking a pose. Then it flew to a tree nearby. It was a real cool sight.

@JQ LLC - That sounds just like Christo! Sometimes, when you encounter him, it feels as if he's been expecting you.

I thought there was a vibe about it.

Your site is great as are your photos. Thanks for the response.

Are there small preferably foldable binoculars which can take photos?

10:28: there are apparently gizmos which can interface a phone camera to a binocular. Unfortunately. It wasn’t available for the brand of binoculars I already own, so I gave up.