No, the Moishe's Bake Shop space is not on the rental market 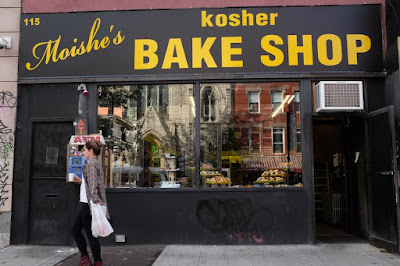 I called the bakery and spoke to Moishe Perl, who also owns the building. He laughed and said, "People always put up these things." He assured me that he did not put up the listing and that he is not closing. He might be doing some renovating over the summer, but that's it.

When I told him the listing said his place will rent for $27,000, he laughed even louder.

Oh my god, this gave me a heart attack! Thank goodness it's not true. Glad to here Moishe is in good spirits about the whole thing.

I hope Mr. Perl will read all these comments. His bakery is more than a bakery. It is history. Culinary history anyway. I've been in the EV for 40 years and have the good fortune to live one block away. I also have the good fortune of being Jewish in this particular instance because this type of bakery is exactly the type of bakery I grew up with in the 50's. There is no place else that I can get the type of culinary delights that Moishe's has to offer. It is like walking back in time to childhood.
But I will say that if Mr. Perl decided to renovate the shop front, he would do so much more business than he thought possible. His is a unique shop with incredible treats to delight the mind and the body. Just take a bite of one his black and white cookies or tear off a piece of Challah bread and spread some butter on it. A new, up to date presentation showcase would bring in the millennials and newbies to the EV...and we have plenty.
Thank you Mr. Perl for 40 years of breads and deserts that are outstanding!

Owning the building is the only way that shops can survive in the East Village.

And it wouldn't hurt to have some nice coffee and a counter where visitors can enjoy their pastry. But I don't want to tell him his business.

If I am correct, I may be wrong, but like butter in my cookies and desserts, so I bypass Moishe's for those, but Moishe's makes fresh on premises unlike most places.

Home to the best black and white cookie ever.

I love their goods but there have been problems. I like the chocolate Mondel bread but it hasn’t always been fresh. And once
I bought a cheese danish to go, and noticed when arriving home that someone at the bakery took a bite out of out.