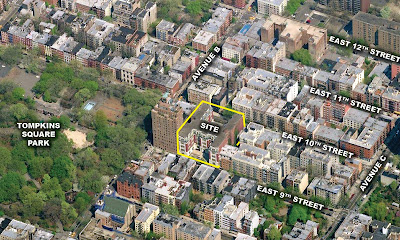 Developer Gregg Singer is now headed to court to try to turn the former P.S 64 and CHARAS/El Bohio community center on Ninth Street into student housing.

The Wall Street Journal has the story (subscription required):

After a 20-year fight, Mr. Singer filed suit Wednesday in federal court complaining he has been illegally blocked by a “conspiracy” of local elected officials in New York City, a preservation group and a hedge-fund manger who lives next door to the school.

The suit cites emails alleging that the opponents worked together to block building permits for the project. “This is a case of seller’s remorse as much as it is a case about a vindictive political plot aimed at improperly reclaiming property legally sold by New York City,” the suit said.

The claims are “ludicrous,” said Andrew Berman, executive director of the Greenwich Village Society for Historic Preservation, who was named in the suit. “The reason why he hasn’t been able to get a permit for the last five or 10 years is because he hasn’t filed one that is actually legal.”

According to the Journal, the hedge-fund manger in question is Christodora House resident Aaron Sosnick, who is chairman and manager of A.R.T. Advisors LLC with $3.7 billion under management.

Singer bought the property from the city in 1998. He wants to turn the landmarked property into a dorm called University Square, and continues in a holding pattern while the DOB maintains a Stop Work Order on the building. (This website has background on the building from Singer and company's perspective.)

Community activists, preservationists and some local elected officials have long been opposed to Singer's plans, and want to see a return to use as a cultural and community center. The building became a community center after the school left in 1977.

Previously on EV Grieve:
Not fake news then: Pro-dorm rally organizer admits some participants were paid, report says
Posted by Grieve at 4:20 AM

Wait no old PS 64 rant and flame war thread? Not only is the neighborhood going to hell but EVGrieve as well?! Oh the humanity!

I was so hoping to rehash Greg Singer et. al.

STILL WAITING for DeBlazio to make good on that re-election campaign promise to retrieve the Charas building from Singer, but I am NOT holding my breath!!

The city has had plenty of ammo to use in order to get this community resource, which was improperly sold to Singer, RETURNED to the community, so why NOT use it?

• Landmarking the interior as well as the exterior, some of which Singer vindictively destroyed as a FUCK YOU to those in the Christodora House who oppose him