Looking at Boris & Horton, opening soon on Avenue A 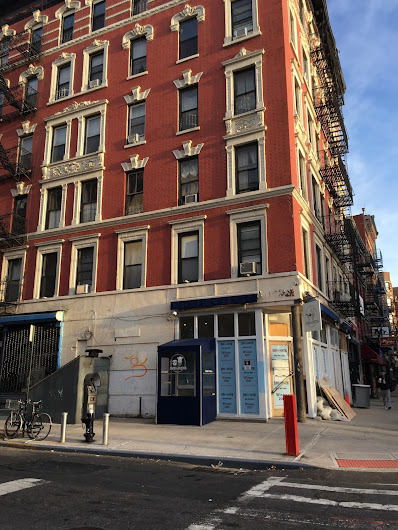 Signage is up over on Avenue A at 12th Street, where Boris & Horton is expected to open this month... 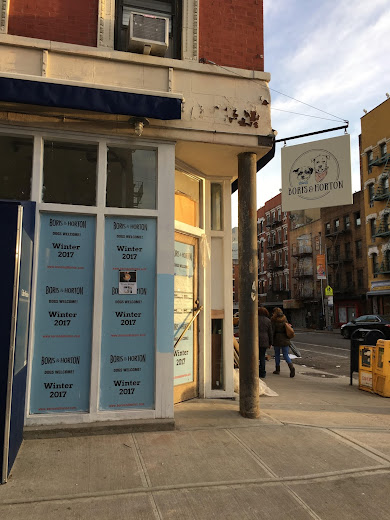 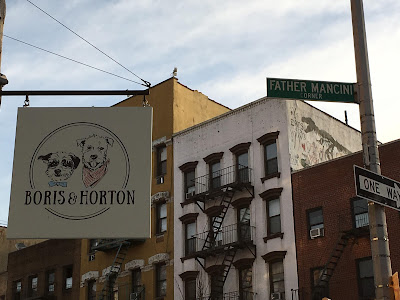 As previously noted, this is billed as "New York's first dog friendly coffee shop and community space." And this is not an actual dog cafe, as some media outlets have implied.

[C]o-owner Logan Mikhly tells Eater. “I think it’s awesome that people are super excited, but we definitely are a different experience than the animal cafes you’re seeing opening in the States that are like in Asia.”

In a deal with the Department of Health, Mikhly and co-owner Coppy Holzman [Logan's father] created three separate areas: a street takeaway window to order food and drink, an indoor seating area where dogs can go but food cannot be ordered, and a regular cafe area separated by plexiglass where dogs are not allowed. Basically, Boris & Horton cannot serve food where dogs are, but people can order food and bring it into the designated area with their dogs.

There are two entrances... the one on the corner. No pups can come in this way... 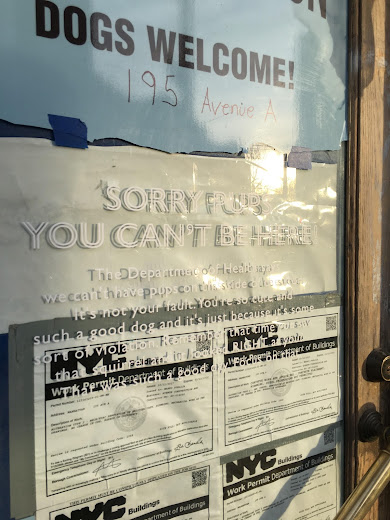 Dogs and their owners can enter in a separate entrance on Avenue A (this is the former Racelette space) ... 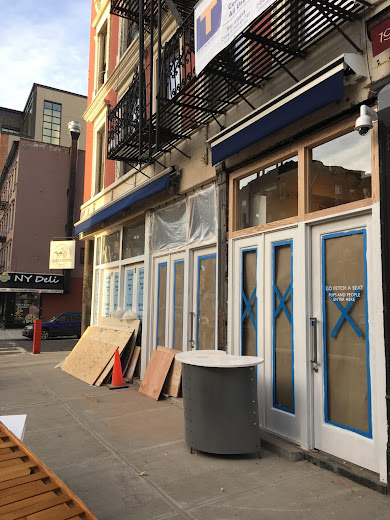 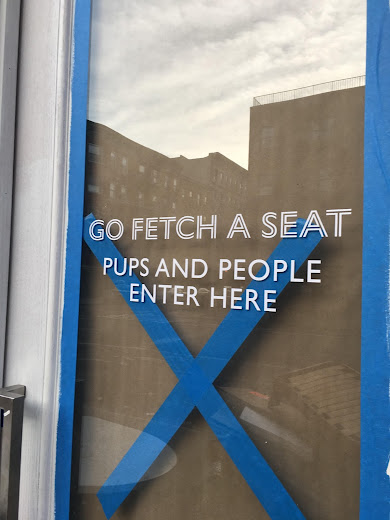 There is also a to-go coffee window on the 12th Street side... 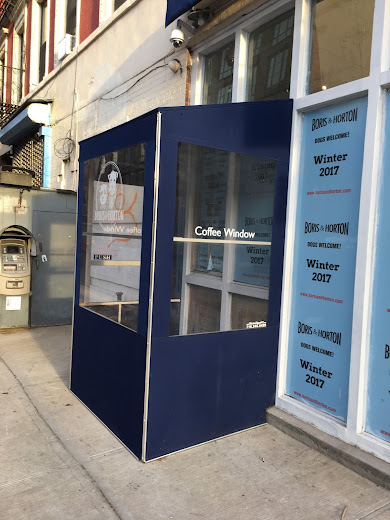 The cafe, named after the owners' dogs, will reportedly serve City of Saints coffee, Balthazar pastries and Murray’s Cheese cheese plates, among other items. (They were OK'd for a beer-wine license.) The space will also host the occasional dog-adoption events.

Boris & Horton will be open from 7 a.m. to 11 p.m. Find their website here with more details.

Email ThisBlogThis!Share to TwitterShare to FacebookShare to Pinterest
Labels: Boris and Horton

can someone explain the difference between this and The Bean, which has always been dog friendly?

The Bean as a business that sells food should not be "dog friendly" it is violating our sanitation laws. This soon to open place seems a little complicated and I truly doubt anyone with obey the plexiglass partition and dogs will be found in all sections.

My question is, can people without dogs go into the doggie part so as to enjoy canine companionship, even indirectly?

They are pretty long on marketing all their dog stuff, to just have the old Raclette 8x14 pen for said pups. Missing Ost more, but have been enjoying Ciao for now coffee since Ost.

Since when are they allowed to use the sidewalk to sell coffee to go? I bet that's illegal.

Public service announcement: to all people who dislike dogs and/or the concept of this business, you don't actually *have* to patronize it. You don't even have to go inside. Technically, if you are so put off that you cross the street to avoid it, that's also permissible. In other words you have options.

Anon. 10:07, nothing illegal about selling through a window to people on the street. Pizzerias do it all the time (Stromboli, the late Nino's, and plenty of others), and Hearth on 12th and 1st has their Brodo window outlet. Those are the ones that come immediately to mind, but I have no doubt there are more.

10:13, yes! You are right. But if you live on the block you're going to get strollers, dogs, patrons, looky-loo's, junking the corner up. So let us complain, merci a bientot.

Is this a cute hobby until you establish your investment portfolio?

If 'Logan" says it's "awesome" and he's "super excited", then count me in.

Ost sold coffee from that same side window, so there's no reason why Boris and Horton can't do the same. The space they'd be "junking up" is not passable because there's a small structure (with an ATM machine) on the sidewalk that already abutts the space. So, no harm/no foul. They've been working like crazy to get Boris and Horton open. The owners seem very responsible and attentive to the community. It sounds like a nice addition to the neighborhood!

Not a bad spot to stop for a coffee, but my dog only likes people for some reason haha. Oh well!

Can’t wait for this place to open. As a dog owner that takes my dog with me pretty much anywhere he’s allowed I’m happy there’s a spot that caters to the large population of dog people in the hood. Also a huge fan of wall up windows.

God forbid anyone ever criticize anything that may involve anything involving dogs without getting "you're a dog hater" comments. My concern about this place is it will lead to people bringing their dogs absolutely everywhere sooner or later. I have noticed that every time I go to West Side Market on 3rd there are people walking through the aisles with their dogs often without leashes. Forgive me for not wanting your pet sniffing my cheese before I bring it home. I like dogs just don't care for some dog owners who feel entitled to bring spot to places where pets are not allowed.

Would love to see how their coffee and food is or is it going to just be the cafe that allows dogs? There is good coffee one block away either side. Saltwater coffee and Ninth street espresso.