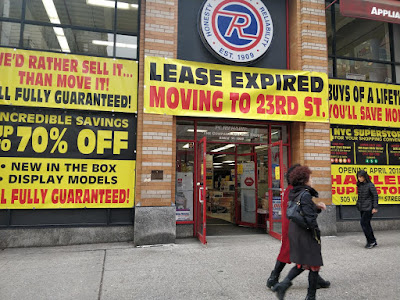 Signage is now up at the P.C. Richard on 14th Street at Irving Place announcing their upcoming move to 23rd Street. (It seems as if this location has been going out of business the past three years.)

As you likely know, the city owns this site, and there are plans to turn the property into a "workforce development and digital skills training center" — aka tech hub.

In February 2017, the de Blasio administration unveiled the renderings for Civic Hall featuring "a tech-focused work and event space" that will anchor the 20-plus story building.

Per the city's news release on Civic Hall:

“This new hub will be the front-door for tech in New York City. People searching for jobs, training or the resources to start a company will have a place to come to connect and get support. No other city in the nation has anything like it. It represents this City’s commitment to a strong and inclusive tech ecosystem,” said Mayor Bill de Blasio. 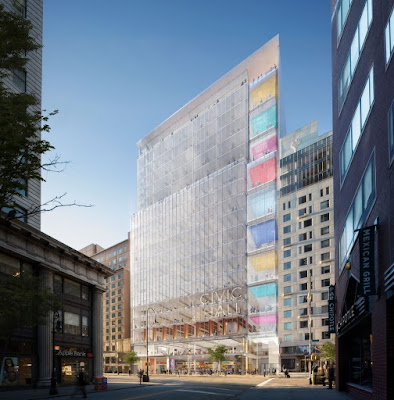 CB3's Joint Economic Development Committee and Land Use, Zoning, Public & Private Housing Committee will be discussing the matter during its meeting on Feb. 7. (We'll have more on this closer to the time — 6:30 p.m. at the Henry Street Settlement, Youth Services Gymnasium, 301 Henry St.)

The Greenwich Village Society for Historic Preservation (GVSHP) has been leading efforts behind a rezoning of the area to enforce some height restrictions and affordable housing requirements. GVSHP officials make their case here.
Posted by Grieve at 4:30 AM

I can’t wait for the Timmy Neutron Café to open on the ground floor! Kiosks as far as the eye can see, filled with soylent in sippy cups, and a crisp, bright - dare I say blinding - lighting scheme inspired by the creative, disruptive tech team that leveled Hiroshima. Pure charm.

That laptop design rendition of the building resembles the water paint set I use to get at the local stationary stores back in the good old simple days. If you turn it on it's side of course.

Don't only go after de Faustio, since he is looking for every excuse to leave town including meeting with the dotard in DC (so much for that). Where is Speaker and new/old developer puppet Corey Johnson on this?

Honestly, 9:06AM, this country doesn't let anyone else on this planet live in peace, so why should you get the honor?

I agree 9:06, why can't we have some more dorms or another Trader Joes!

Between this and the Target-plex, we are seriously effed.

Where should we build New East Village?

I actually have no opinion on what should go there as I'm sure vertical farms aren't being considered and low income housing in Manhattan 2018 is probably figured at earning 100k a year. I would like a downtown ban on street level ATMs.

Sadly that block died years ago - NYU killed it a long time ago. RIP Luchow's,
The Palladium, The Boxing Gym, the many small old stores from years ago.Used to love Luchow's, especially at Christmas!

Nightly, as I bask in the warm glow of my beloved TV, I shall fondly remember PC Richards and still not give a hoot what they do with the space.

Isn't one of the attributes of the digital economy is that people work remotely and meetings can be done via Skype or another web platform?

Once again, the carrot on the stick that is "jobs". It remains to be seen who these jobs are for or if the majority of them are for recent graduates of expensive colleges all under the age of 30.

Ahemm.
REBUILD THE ACADEMY OF MUSIC !!!!

I really have to laugh at Mayor Bill's embrace of tech. In order to participate in a tech democracy you have to have a smart phone and credit card. This is Progressive politics. The irony is not lost on me. Obviously it is lost on Mayor Bill and the Dems that run/ruin our city. His administration not only destroys a neighborhood but furthers the divide between rich and poor. DOWN WITH ONE PARTY RULE!

For NYC in 2018, there seems to be less and less shopping.

Squashed KMart, and that is the only big/bigger store in the area below 14 St.

No more PC Richards, that just leaves Best Buy on 14 St, and they seem to
have a whole lot of nothing, some phones and whatever.

No major stores going in the direction of Ave D, from 14 St to Houston, so really, WTH ?

Right, a micro Target is coming.

Luchow's?
The Palladium?
Not unless you bring back Julian's as well.

But in all honesty; the real crime is E. Houston.

NYC is a bad enough residential landlord. Who in the world would want to pay rent to them as a commercial landlord? Who is going to maintain this building? This is a dumb idea out of the box. They should sell the place and move on.

Love the sign that says
"WE'D RATHER SELL IT...
THAN MOVE IT!"

There's still alot to love about New York City, but over the last 20-30 years..goddam.. it has definitely lost a significant amount of zazz. This latest plan to corporate hive-ize this town is just another example of of how far we have DE-volved.

I saw Von Elmo at the Palladium Von is God

I just don't understand what this "tech hub" is supposed to even BE. Because right now it sounds like WeWork with less purpose/high-paying tenants and without free marshmallow-krispie snacks.

"Workforce development and digital skills training center ... front-door for tech ... commitment to a strong and inclusive tech ecosystem"—all of this is substance-free PR word vomit. Does de Blasio really think anyone other than his RE cronies buys this crap? Do people *actually in tech* need or care about this dorky proposed "mecca"? I voted for him the first time around, but he is seriously the worst and has got to go.

Big city 'progressives' dont care about poor/working class citizens. They want high income techies and high culture and expensive buildings for foreigners. NYCHA buildings are literally falling apart and the homeless population is approaching 80,000 but this is a priority. We need an alternative to the corrupt Democrats.

Do we really need to start blasting Corey Johnson (who is as progressive as De Blasio) as some sort of fascist when he has only just stepped into office last week?

Do we really need to keep misusing the word fascist?

I genuinely don't understand what this is FOR. Are City programs going to occupy all but the ground floor (I assume retail)? What programs? Or do they think rando tech companies are going to rent on this stretch? I'm just confused.

I think that's what Donnie was saying.

I did not misuse it.

Well, not fascist, but a rebny stooge and political opportunist
http://www.progressqueens.com/news/2018/1/23/real-estate-money-flowed-into-queens-democratic-county-committee-headed-by-us-rep-crowley-before-gentrification-friendly-council-speaker-was-named-report

CB3 where are you?

Does anyone know when they are closing? I tried to call, but no one is picking up the phone. Thanks.

8:05am I don't know what rock you've been living under the past few months but DeBlasio was just reelected for a second and final mayoral term by a wide margin. He's not going anywhere unless he says and/or does something which gets him removed or he resigns over to avoid removal.

I just called and they are slated to close on Feb 28th. There is an apparent sale offering huge reductions on items. I have to say I am disappointed. I patronized this location for over twelve years. It's too bad. But it is a definite sign of the times.

Hold that thought Anon @9:31 about DeB not going anywhere. A few of our City Council members have been quietly floating the idea that term limits should be lifted on council members and allow themselves 3 terms. If this travesty of the public will is allowed to happen, then Mayor DeB might find some slippery way of getting a third term. He can dream of being on a National Ticket (every politician looks at themselves in the mirror and says Presidential!!); it never will happen.