Keeping up with the Kardashianisms 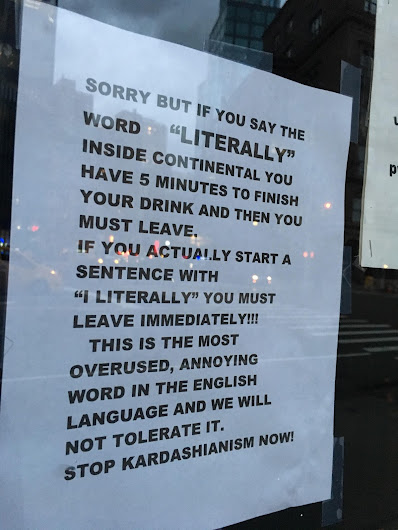 Several readers have pointed out that the Continental expounded on their (tongue-in-cheek) ban on the word literally. Their stated goal now, per the updated flyer above, is to stop “Kardashianism.”

Bar owner Trigger Smith told Grub Street yesterday that the sign is not meant to be serious, though he does hate the word literally.

"I had a woman from Miami the other night tell me it's happening down there," he says. "And it’s not just millennials. Now you hear newscasters using 'literally' every three minutes on the Sunday news shows. What’s annoying is people aren't even aware they're saying it. How could you be so unaware of your words that it's coming out every couple minutes?"

There are also posted notices stating that the bar's last day here on Third Avenue at St. Mark's Place is July 1... 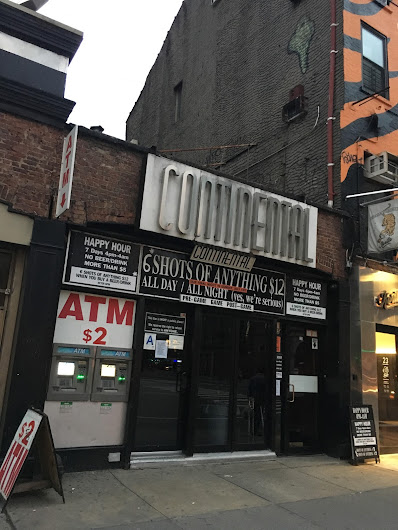 Also updated: it is now six shots of anything for $12. Previously five shots for $12. And five for $10 before that. 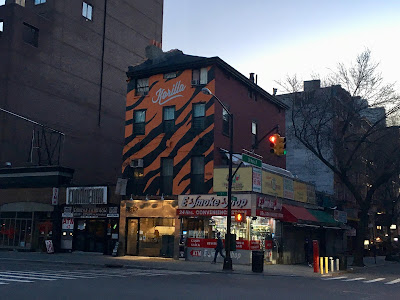 Email ThisBlogThis!Share to TwitterShare to FacebookShare to Pinterest
Labels: Kardashianism, The Continental

I miss the days when this place was about the music and not serving the bros that have invaded the neighborhood.

I don't have a bar but if I did, and you came in, and started using the word "amount" where you should be using "number"... your ass is out on the street. Now. No five minutes to finish. No mercy.

Give me a break Continental! You post a sign "5 Shots for $12" and expect normal people to line up? Just serve the drinks and take the money already. Seriously!

Ha. I love it. The people whining about the sign are absurd. It's funny and also kinda true.

So sad that they will demolish that beautiful brick building wow. That's crazy.

Six shots for twelve? That reminds me of the quarter beers that were served in the Bowery bars.

@9:51AM If you watch the local news, or listen to people on the street, every time someone outside on the street falls on the ground, witnesses will say they fell on the floor. And when people indoors fall on the floor, people say they fell on the ground. Why this concept is so hard to master is a mystery to me, but the entire English language seems to be getting mangled more and more each day. Basic phrases are the most common victims. People confuse basic phrases like “on the fence” with “ in the fence.” The old phrase “close to the vest” is now “close to the chest,” since I guess only hipsters wear vests these days, even if they are made of corduroy. In Die Hard, Bruce Willis called himself “The monkey in the wrench” so I guess we can blame Hollywood too.

It’s so bad there is a whole website called Malaphors.com that catalogs how our language is being mangled, especially by our leaders. Bernie Sanders said “we can't keep kicking this issue down the can.” Steve Bannon was quoted in the book Fire and Fury saying “It’s as plain as a hair on your face.” The top Malaphors for 2017 say it all:

Fourth place – Dead as a cucumber

Third place – It is finally sinking through

Second place – Shit or get out of the kitchen

First place – Welcome to my shoes

As for Continental, they jumped under the shark a long time ago, now they are as dead as a cucumber.

Haha the BBC needs to know about this!
#triggergate!

I have never been inside Continental and it's pretty funny how people now can't decide if it's bro bar trash or historic monument now that it's closing is announced, but something tells me that the bartenders in there do not have waxed mustaches and vests. It's not an overpriced cocktail speakeasy, it's a dive bar. That or the walk by I've done hundreds of times has completely misled me as to what's actually going on inside.

Could EV Grieve start a countdown clock (a la CNN and MSNBC) to keep us up to date when this blight on the neighborhood closes? Does anyone have any news on when Grass Roots GingerMan is scheduled to open?

The misuse of floor/ground makes my hair stand on end.

Can we add a line about this to the sign?! May as well keep adding to the list of peeves.

Giovanni: Isnt the correct comparison, she/he drinks like a fish?

Omg...how about we stop triggerism ?!?!
How many shots for how much!?;
You are and have been actually worse for the neighborhood stop trying for press like you are worth the fight.

Just heard Nikki Haley discuss her affair with The Donald (those are the accusations flying around, no pun intended): “I have literally been on Air Force One once and there were several people in the room when I was there,” she admitted. Maybe she meant figuratively.

That is literally the most funny story I've heard in recent memory.