BarBacon looking to pig out now on 4th Avenue 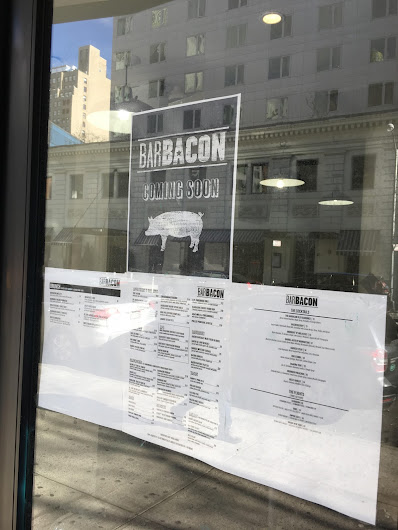 BarBacon signage recently arrived on the front door of 127 Fourth Ave. between 12th Street and 13th Street... where the proprietors of the bacon-centric bar-restaurant in Hell's Kitchen are looking to expand their business ... there's a CB3 notice up in the window as well for a yet-to-be-scheduled SLA committee meeting for a new liquor license... 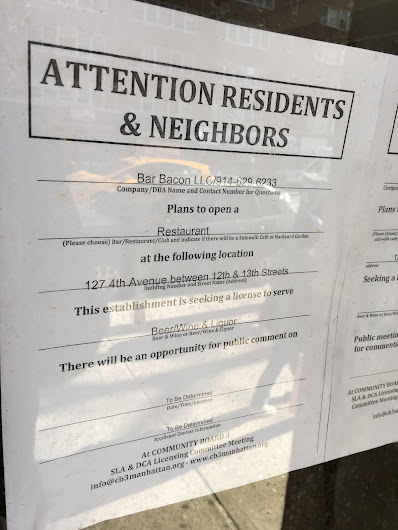 As you may recall, BarBacon was looking at opening in 171 Avenue A between 10th Street and 11th Street late last year. However, BarBacon withdrew from December's CB3-SLA committee meeting. And apparently the BarBaconers decided on a different location.

In any event, here's more about BarBacon, which has an outpost on Ninth Avenue: "Bacon flights & other swine-spiked grub served in a gastropub setting with a large bar." (Read more about the place here.)

This Fourth Avenue space, now chopped into two storefronts, was previously the bar Royal until April 2016... 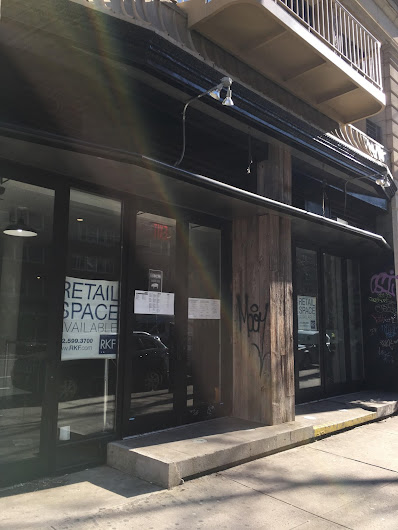 Previously on EV Grieve:
BarBacon looking at expanding to Avenue A
Posted by Grieve at 4:25 AM

Bacon is great, in moderation. A little goes a long way.

Jesus H. Christ, this place hasn't even opened and yet I can tell from the design on the "Coming Soon" sign that this place is going to be sickeningly generic... Perfect for the great unwashed who occupy this city.

Better location, closer to the bros and dorms, and no garden to bother the neighbors.

I’m still waiting for a place that serves Fake Bacon, which unlike Real Bacon is not in the same category of cancer risk as tobacco smoking and asbestos. But that’s just me.

@Giovanni - wasn't Sizzlean some psuedo healthy bacon alternative? I just remember the commercials in the 80s when all fake health food was popular. I'm not even sure if it was meat.

@10:32. I remember those commercials. Sizzlean was supposed to be a healthy alternative to regular bacon. The tagline was “Move over, bacon, there’s something leaner.” The problem was it was still almost 40% fat, so they probably should have called it SizzleFat. Sizzlean was probably bacon fat mixed with some cereal filler. Or perhaps it was Soylent Green.

Oddly enough, Baco-s™, the famous "bacon flavor bits," are vegan. Not that most vegans OR non-vegans are interested in chomping down on imitation-bacon-flavored "bits," but someone out there is buying what Betty Crocker is selling.

"Animals are my friends, and I don't eat my friends." —George Bernard Shaw

What is up with millenials acting like they discovered bacon? As if previous generations had no clue about this tasty newfangled treat. Settle down, Beavis.

Most of my friends such so pass the meat!