On East Houston, El Maguey y La Tuna will have to close after the landlord doubles the rent 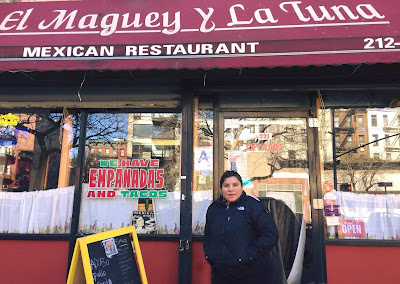 On Friday, friends of El Maguey y La Tuna shared the news that the 15-year-old Mexican restaurant on East Houston between Attorney and Ridge will have to shut down at the end of March.

We're sad to announce that El Maguey y La Tuna, a classic mom-and-pop Mexican restaurant on East Houston street, will be closing at the end of March due to ... yep, the landlord doubling the rent.

Maria Cortez and her family are considering opening a food cart to keep serving the community, and we'll be helping her as we see if anything can be done to save this EV/LES staple. Can you help?

Despite what New York City Hospitality Alliance would have you think, vendors do not drive restaurants out of business — greedy landlords (aided by city policies that encourage gentrification and allow landlords to raise rents with impunity) do! Vendors ARE mom-and-pops, and we stand with all other independent small business owners in NYC.

Cortez told the Lo-Down that the unnamed landlord is increasing the monthly rent from $7,000 to an unmanageable $14,000.

Cortez told us it was difficult enough to sustain the small business before the increase. In addition to the higher rent, the property owner wants El Maguey to pay half of his property taxes. 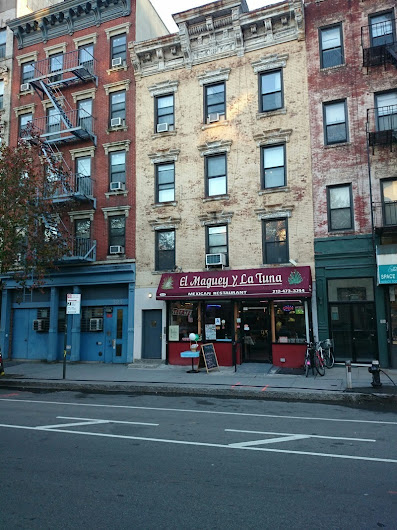 The restaurant started in Williamsburg, but relocated here after a fire in 2002. According to a feature in The Villager from 2008, "Cortez, who was born and raised on the Lower East Side, said the family decided to reopen there in order to give back food and culture to the Lower East Side."
Posted by Grieve at 4:30 AM

booooo! i love this restaurant! was there just a couple weeks ago, and had the best molé. inexpensive, and with a cheery atmosphere. i will be truly sorry to see them go. what a loss.

Nooooooo!!!! 11 more places to go and I’m moving. So sad, a great family run restaurant that made you happy such a small gem existed for your pleasure. Is this the market? $14k? The landlord doesn’t deserve them and I hope a cart or a different location flourishes for the Cortez fam.

Shit. Great food, nicest people. Come on, City Council and Mayor, figure this out -- we can't keep on losing places like this!

I wonder why the rent had to be doubled? Could it be that taxes have gone skigh-hy? Insurance threw the roof? Water costs too much?

I'm shocked that A Maguery y La Tuna could make $7k rent work. Other than a bar, what kind of for-profit business can pay $15k for a place that size?

Regardless, it was a sweet place, a somewhat under appreciated neighborhood joint that I'm sad to see close down.

This is my favorite Mexican restaurant. Good affordable food, but the best part is feeling like I'm with family. I hope they can reopen somewhere close by, although I know that's probably not likely in this new boring city.

We'll be seeing PLENTY of them come election time....

Pathetic - when the city is harassing Food Cart vendors they always say it's to "protect" brick/mortar stores but when the brick/mortar stores are run out of their spaces due to greedy landlords, the city's not rushing to assist, I see. So sad that business owners are going from storefront to foodcart, isn't it supposed to be the other way around?

The owner of the building died and his/her son or daughter took over. That person doubled the rent because just a few streets away like Ludlow, businesses are being charged this amount. I love this place and I hope they find a new location. Don't give up!