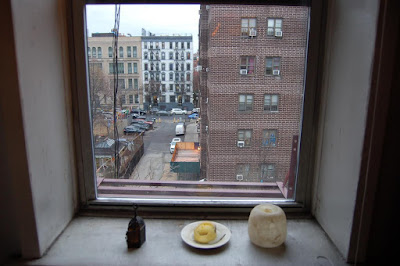 I started hanging out in the East Village when I was a teenager in the mid-1980s — maybe I was younger than a teenager. I used to go to the Pyramid Club and King Tut’s Wah Wah Hut and a bar called the Aztec. I moved to NYC in 1987 but I was living on 25th Street. Then I lived in Stuy Town and, in 1991, I was doing a cable TV show on Manhattan Cable called "The Brenda and Glennda Show." It was a drag queen activist show. I was Glennda Orgasm and my co-host was Brenda Sexual. We would go on the street and interview people about gay rights and drag. It was street theatre. We did a series in Buffalo at Hallwalls Art Center. We also did a show on the Circle Line boat. There were transgender people, drag kings and male to female lesbian transsexuals.

In 1990, I was living on the Lower East Side, on Rivington Street, and I had to leave that apartment. Brenda Sexual's lease was also up and I said, “why don’t we get a place together?” He found this apartment. The rent was $750. He let me have the big bedroom.

It worked out really well because we were collaborators, we were doing the show together. He had the foresight to put my name on the lease. In those days you took it for granted that every apartment was rent stabilized. I never thought I would be here still in 2017. It’s going to be 27 years. It was January 1991 when we moved here. I have always lived on the top floor of a walk-up so I was used to that. He moved out a year later. He left NYC and now he has a very successful career as a landscape architect in Texas. 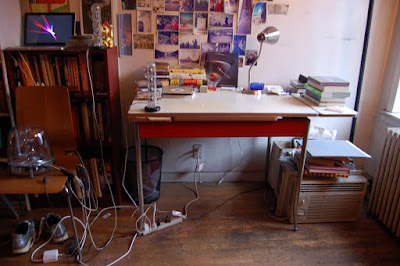 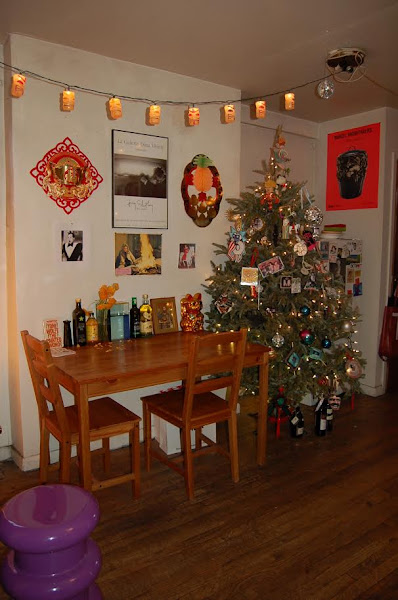 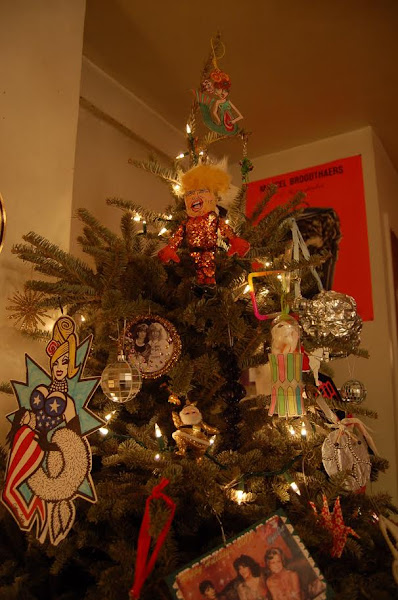 Brenda Sexual found it in The Village Voice. He said it was between B and C. I thought, I can handle it, I lived in a dump on Rivington. It was dangerous over here then. There would be drug dealers and gangs camped out on my doorstep. I would come home from the Pyramid Club and the whole street would be deserted until you got to my door and everyone would be camped out at 3 in the morning — all these scary drug dealers. Am I going to get into my building alive?

There would be massive fights outside. People would be beating each other up, like riots and we couldn’t leave the apartment until it was over. It was a really scary but also exciting place to live in the early to mid-90s. The reason we wanted to live here was because we were spending a lot of time at the Pyramid Club.

And the cool gay people lived in the East Village. We weren’t like these bougie queens in the West Village. We had a punk rock background from the 80s and we were doing drag that was political, it wasn’t Liza, even though we like that too. It was the alternative gay scene here, the Pyramid Club and King Tut’s Wah Wah Hut, which was kind of mixed and then there was the Wonder Bar on Sixth Street, the Crow Bar, which was on 10th Street and Avenue B, the V Bar was on Fourth Street and Second Avenue.

You would run into people that you knew every day on the street or in Key Food. People would come up to me in Key Food and ask “Are you Glennda Orgasm?” Everybody watched cable in those days. When you came home at 3 a.m. and you were stoned or too coked up to go to bed, you turned on Channel 69 and there was another rerun of "The Brenda and Glennda Show." It was easy to be famous in those days.

I am at the very top of the stairs. It is the most private feeling. You don’t have everyone in the building walking past your door. And I love that the stairs keep me in shape. I have a view of the Chrysler Building and a view of the new World Trade Center from the Mao Room and I also had a view of 9/11 from that room.

I love this particular corner of the East Village that I live in. It has really preserved the old vibe of the East Village because it is still very Latino. I live near the Nuyorican Poet’s Cafe. It is a real East Village institution. There are some nights when I come home and there will be a line waiting to go in. They're not waiting in line to buy an iPhone or to get into some horrible brunch place to get drunk. It’s a great venue where they do music, plays and poetry readings. I feel honored to live near a place like that. It feels protected. De Blasio is supposedly going to give them grant money.

The projects are across the street so there are still real people there. I belong to a credit union, which I like to call my Communist bank, which is on the corner. The People’s Lower East Side Federal Credit Union. I’ve been there for 13 years. They give out grants to small businesses. The business in the storefront in my building is funded by my Communist bank. That’s also a good feeling that it’s not a trendy biscuit place that is going to close in six months. It’s a place for the neighborhood. They serve Puerto Rican and Dominican food. It’s not pretentious. Latino people in the neighborhood eat there and you also get the new trendy people and hipsters who also eat there.

What do you think of the East Village today?

The East Village has become almost unrecognizable. I like to support new businesses. But a lot of them I’m just not interested in. I don’t want to eat candied waffle ice cream cones. I still go to Two Boots. I’m very loyal. I’m a traditionalist and I like to patronize places that I’ve been going to since I moved to NYC. Casa Adela on Avenue C is Puerto Rican food, it’s delicious.

I love that I am able to live here alone. I am too old now to put up with roommates. It has been 10 years that I have been roommate free. The second bedroom has been the Mao Room for 10 years. In 2007, when my last roommate left, I cleared out that room and I did a Santeria ritual to get the bad energy out. The room was bare. I had a 3-D postcard of Chairman Mao that my friend Tomoko bought for me. The postcards are made in North Korea. I was traveling with her in Hong Kong, she was my photographer. She knew that I really liked Mao. I decided to put the postcard up and my friend Nancy came by. She writes about the Cuban Revolution. She pronounced it the Mao Room. I liked the way that sounds, the Mao Room. I decided to make it a tribute to Mao and Che and Fidel Castro.

There’s stuff in there that I bought when I was in Cuba and China. It’s become an ongoing art project that people make donations to. My friend Crazy Legs, a famous break dancer from Rock Steady Crew, gave me the Jean-Michel Basquiat poster, it has a Communist theme to it.

Should I still have a Mao room? He’s so controversial and Communism is really out of vogue now. I don’t really care. It’s an art concept. It’s not necessarily political. But it’s still a living art project. People do bring things and say I thought of you when I saw this and it’s for the Mao room. 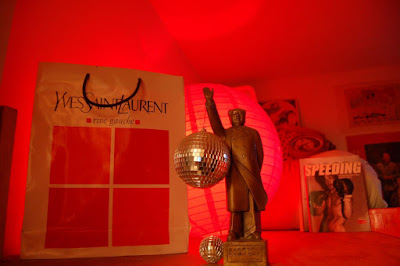 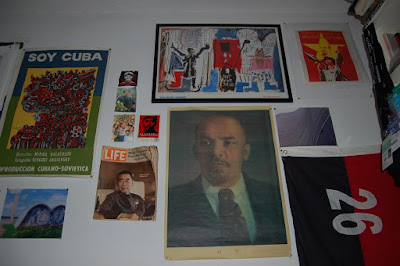 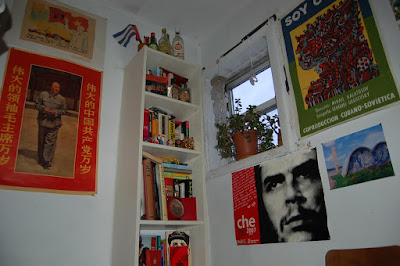 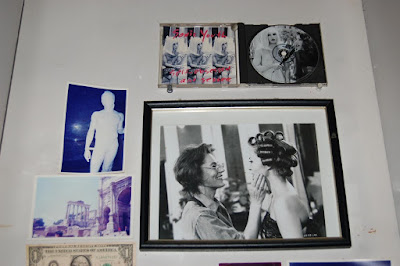 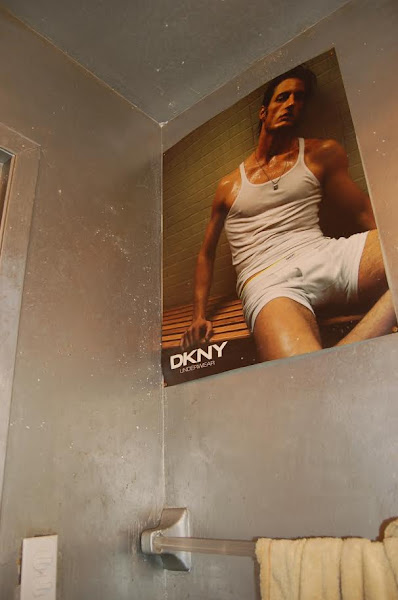 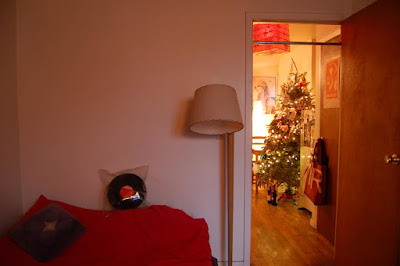 If you're interested in inviting Susan in to photograph your apartment for an upcoming post, then you may contact her via this email.
Posted by Grieve at 11:00 AM

I LOVE this apartment. I'm glad I'm not the only one who collects mass murderer memorabilia.

I just love these time capsules of EV history.

Awesome! so glad that folks can stay in the hood. I am stabilized too! But it's a one bedroom and there are 3 of us in here - anyone with a 2 bedroom wanna trade - we are building a shelf for our kid - but a bedroom would be nice.

my god i love this series! love the distinction between queer/EV and gay/WV! who knew? also i am charmed by that DKNY poster/silver wall/towel rack combo. i will be looking for the cable show on youtube! thanks grieve, susan, and glenn!

The Brenda and Glennda show was one of my favorite things on TV, along with the Gay Dating Game. Thanks for the mammories!

My wife and I loved watching the Glennda and Brenda Show! I t was the best. And since we lived in the hood, it was especially fun. I'm so glad Glennda is still here. I was just remarking about the show the other day after watching a bit a drag queen show on Viceland that reminded me of Glennda and Brenda. I moved to the East Village just a few months before Glennda, so his memories of the neighborhood are very familiar. and yes, thanks for the mammories!

Happy to see you are still you and doing well.

Been friends with Glen on FB for years, he lives around the corner from me, another OG of the EV