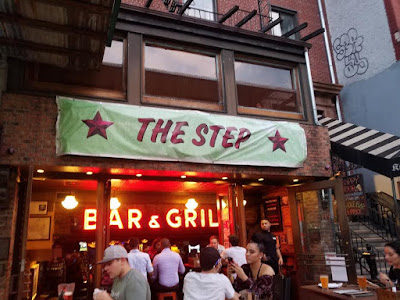 After eight-plus years as the 13th Step, the sports bar/SantaCon hotspot at 149 Second Ave. is now simply The Step here between Ninth Street and 10th Street. (Thanks to EVG reader Aaron Wilson for the photo!)

No word at the moment what may have prompted the dropping of the 13th. There isn't any mention yet about a name change on the bar's website or social media properties.

Several readers/residents found the name to be in poor taste upon the bar's arrival. The term 13th Step is used as a euphemism for inappropriate sexual advances by a member to a newcomer in AA. It means other things too.

From the EVG way-back machine in July 2010, Michael Asch, one of the two senior co-owners at the time of the 13th Step discussed the rationale behind the original name.

Anyway, so long to that comic-sans neon signage... 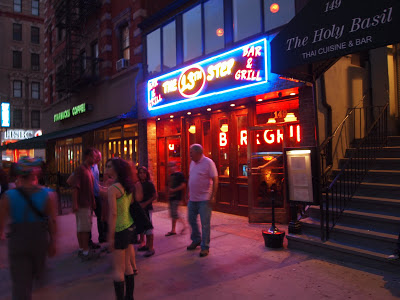 Email ThisBlogThis!Share to TwitterShare to FacebookShare to Pinterest
Labels: the 13th Step, The Step

Now if they could just remove 'The Step' and Just DISAPPEAR everything would be alright with that portion of 2nd avenue.

Obviously that temporary looking tarp sign was a rush job to fix some kind of problem, Maybe they finally realized that the “!3th Step” is a well known term for predatory sexual behavior, and that #MeToo does not appreciate the sentiment, Kind of like “boofing” or doing a “train” whcih are also predatory or abusive behaviors. Looks like they got Kavanaughed. That it took them 8 years to realize how misogynistic their name was shows just how out of step “The Step” really was.

one of the reasons the east village has changed. this bar.. right here.

A nuisance by any other name...

I still miss The Telephone. Chicken pot pie with a puff pastry lid and a pint of Strongbow cider. And the iconic red London phone booths.

I plan on getting a loan from a bank, or maybe search for an LLC collective of crooked foreign oligarchs to finance a bar I would like to open up called The Devil's Triangle. Then change it to The Triangle after weeks of free promotion from social media outrage and news media coverage