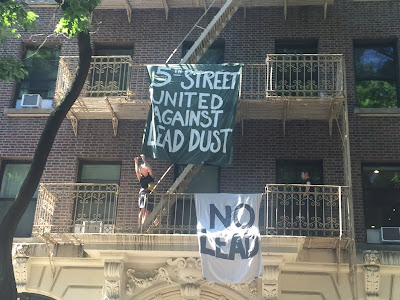 Tenants in two buildings on Fifth Street spoke out last week against construction as harassment and potential lead exposure on the block between Second Avenue and Third Avenue.
The residents from 216 E. Fifth St. and 236 E. Fifth St. were joined by the Cooper Square Committee and Lead Dust Free NYC Coalition as well as a handful of local elected officials.
In a statement from the Cooper Square Committee:

Residents of both (pre-1960) buildings have reported work performed outside of the parameters of Local Law 1 of 2004, with disregard for tenant safety. Tenant complaints include work performed by contractors without proper EPA certification, without air scrubbers running or zip covers installed on doors, nor were other measures taken to control the dispersion of construction dust from units where demolition took place. 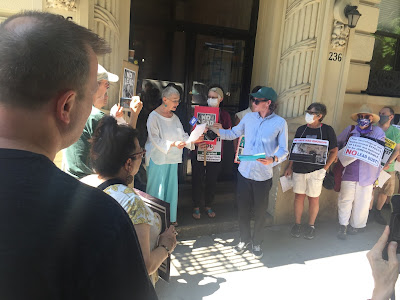 Public records show that the Sabet Group purchased No. 236 in early 2019.
A member of the 236 E. 5th St. Tenants Association said that the landlord "has been engaged in ongoing demolition and renovation of over 15 units, without complying with the lead dust regulations of the Tenant Protection Plan (TPP) ... thereby exposing tenants to dangerous levels of lead."
Meanwhile, No. 216 changed hands in a sale recorded last August, public records show. Tenants identified the landlord as NYU student Caspar Moll-von der Wettern.
Members of the tenants association "recounted clouds of dust and debris circulating throughout the buildings, neglected repairs, unlawful solicitation of buy-out offers and unresponsive management." (There are numerous recent complaints on file with the DOB here.)
"These two buildings on East Fifth Street, just a stone's throw from one another, tell a story which will resonate for many tenants around this city: a continuous battle for their safety and security in the face of hazardous building renovations," Yonatan Tadele, a housing organizer at the Cooper Square Committee, said in a statement.
The Lead Dust Free NYC Coalition released video highlights from the rally on June 30...
Posted by Grieve at 5:20 AM

Ah - The ol' NYU student landlord with a name to match...classic

Hmm, an NYU student with enough $$$ to buy a building & "renovate" it? Raises all kinds of interesting questions in my mind.

Classic play from the predatory capitalist, real estate developer playbook, perfected by NYC developers and their lawyers. Went through all this with Icon Realty. Without the help of Cooper Square Committee and organizing a tenant's association with a group email we would of all been kicked out by shady practices and surreal living conditions during construction. Sad to see it is still such an issue even though the laws ans supposed policing by the DOB is greater now than it ever has been.

This horrible stuff has been happening in so many buildings and for so long.
Not a secret.

How is it that NY Times has never covered this issue?

This is happening all over this neighborhood.

Unfortunately many landlords hide now behind LLCs and use shady management companies to do their dirty work. Next time you see a UHAUL or beat up van parked, watch for a few minutes. That is how a number of places skirt the laws and get rid of construction debris accumulated from illegal practices.

Thank you evgrieve for bringing this to everyone's attention!