A few updates on what has (and has not) been happening at East River Park with the East Side Coastal Resiliency Project (ESCR)...
• A Temporary Restraining Order (TRO), dating to Nov. 4, remains in effect at Project Area 1 in East River Park ... the TRO brought the construction/demolition to a halt. Work started on Nov. 1 below Houston Street at the Brian Watkins Tennis Center. (Read more about East River Action's TRO here.)
• A nonprofit sued the city for allegedly not including enough minority- and women-owned businesses in the construction contract for the ESCR. Media coverage includes NY1 ... the Post ... and The Village Sun.
• A third lawsuit (dating to the spring) was brought against the city by The Tully Group, a large contractor that issued one of the two bids for the ESCR.
IPC Resiliency Partners, a newly formed joint venture, was the winning bidder.
Per NY1:

In a hearing [Nov. 12] before a panel of appellate judges, Jeffrey Cohen, a lawyer for Tully, argued that IPC effectively fudged its bid in order to meet a city requirement that the contractor have grossed at least $1 billion in revenue in the last fiscal year.

More background here.
• The DA on Friday declined to prosecute East Village residents Alice O'Malley and Allie Ryan, who were arrested on Nov. 1 for blocking the construction entrance to the tennis courts when preliminary construction got underway.
Per East River Park Action in an email: "They were in and out of court in 10 minutes when their desk appearance tickets were dropped."
• And here's a look at the former Compost Yard ... the city started removing this in mid-October when we took this photo (first reported here) ... 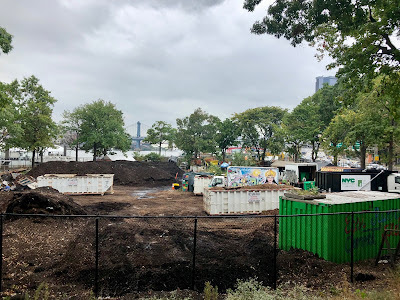 Despite the TRO, work was allowed to continue here ... as the staging ground of the Lower East Side Ecology Center's composting operation was converted into green space to make up for some of the lost park access during construction/demolition over the next four years... here's a look at the area on Saturday... 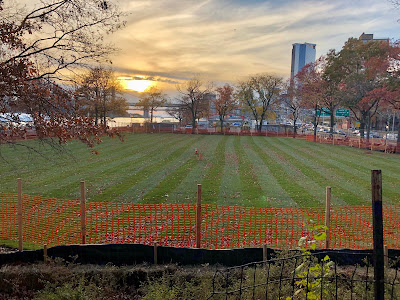 And for some background... East River Park Action and other advocates say there are alternatives to preserve the park and provide flood protection, such as the one mapped out in the years after Sandy. In late 2018, the city surprised community stakeholders by announcing a complete overhaul of a plan discussed over four years of local meetings.
Opponents of this version of the reconstruction project stress that there's a better path forward to protect the Lower East Side and surrounding neighborhoods from a 100-year-flood event and sea-level rise — one that doesn't cause 1,000 mature trees to be chopped down.
Posted by Grieve at 5:09 AM

Before the usual suspect REBNY trolls come on this thread to post and deflect by saying that many trees died (false) and that opposition to this CF BdB/CC of a plan want to do nothing but keep the status quo THIS:

"And for some background... East River Park Action and other advocates say there are alternatives to preserve the park and provide flood protection, such as the one mapped out in the years after Sandy. In late 2018, the city surprised community stakeholders by announcing a complete overhaul of a plan discussed over four years of local meetings."

I am glad the district attorney's office declined to prosecute the two protestors who were arrested by the police for showing their opposition to the destruction of the East River Park as part of this phony East Side Coastal Private Real Estate Asset Protection Plan. That is the first smart thing the government has done during this whole terrible idea.

Thank you for continuing to cover this story. This site is the ONLY one keeping track of the history of this project. The "main stream" news sites either provide zero coverage, or dismiss the issue as a bunch of LES NIMBYs not wanting change, which is absolutely false. At this point, I'm more infuriated by the lack of publicity of this issue more than anything else.

I recently tuned in to a forum of council people vying for the council speaker position and, when asked what her favorite park was, Carlina Rivera said Hamilton Fish, and went on to spout nonsense about how she cares so much for the people of the LES. Really? If you care so much, why are you destroying the largest green space we have? If it really was a great idea, she would be proud to explain her involvement in it, but instead she remains silent.

The city decided that flooding (and destroying) the park every time a major flood came through wasn't a great idea. Plus combine that with the rising sea level and the park will be underwater before 2050 in a natural state. The option of covering the highway with a park is just as bad to the park and environment than just raising the part. You'll need to boat in all that fill, create all the steel and concrete, the tunnel exhaust needs to go somewhere, and you'll have to dig up the park in order to install the drainage from the FDR park into the river.

"The city decided that flooding (and destroying) the park every time a major flood came through wasn't a great idea."

Here we go. Right on schedule. This is a lie. The park was not "destroyed" by Sandy.

"The option of covering the highway with a park is just as bad to the park and environment than just raising the part. "

Excuse me but where the heck is this plan option coming from? Another lie. The community approved plan was not a "Westway" plan.

"After Hurricane Sandy raged through New York in 2012, the community worked for four years with officials to plan flood control. Flood walls and berms (long hills) would be built along the FDR Drive for storm surge protection. The park itself could be flooded during a hurricane. It would help absorb the overflowing waters and quickly recover (as it did during Sandy). It would cost about $770 million.

The plan was not perfect–and the city kept revising it until it became a bloated mess. However, there were the bones of excellent, attractive, community-responsive flood control plans."

Tear down the FDR Drive instead of East River Park

Community groups further downtown seem to have more sway, and they made recommendations to dismantle the FDR, create a beautiful open space/plaza in its palce, and extend a raised bulkhead into the East River. We, on the other hand . . . .

Everyone keeps mentioning all the trees that will be destroyed in this plan. However it’s my understanding- and if anyone has information to the contrary please share - that they will be replaced with new trees. I for one am excited that any plan at all got the green light as this is urgent. Having gone through Sandy and experienced major flooding of my home - that insurance will no longer cover going forward - I’m excited that the city is finally being proactive.

https://zuzannna.github.io/Healthy-Trees/
"Dead trees have a smaller diameter than alive ones! ...it could mean, for example, that freshly planted trees which have a SMALL diameter are in Highest RISK. ...it turns out that trees labeled in “good” health have also higher diameter."

The city is going to replace the large diameter healthy trees with small ones, those that are at high risk of dying (according to above study).


"in one year a mature tree will absorb more than 48 pounds of carbon dioxide from the atmosphere and release oxygen in exchange."
https://www.usda.gov/media/blog/2015/03/17/power-one-tree-very-air-we-breathe

A 10 year old tree absorbs only .10 pounds of carbon/year.
https://www.treeplantation.com/tree-carbon-calculator.html

"Exposure to Pollution Has Long-Term Effect on Multiple Generations"
https://www.census.gov/library/stories/2021/02/air-pollution-diminishes-future-generations-economic-opportunities.html
When It Comes to the Climate, Older Trees Do It Betterhttps://science.time.com/2014/01/15/study-shows-older-trees-absorb-more-carbon/

"Scientists long assumed that as trees got older, they grew slower—just like us. But a new study underscores the climate benefits of the oldest, biggest trees"

https://www.nytimes.com/2021/12/03/climate/climate-change-biodiversity.html
"In nearby yards, old trees were felled by the dozens, thinning the neighborhood’s overhead canopy. Noisy machinery replaced rakes, fallen leaves became anathema, and outsourced landscaping, once the purview of the rich, became common. "
"Mr. Jacobs, for his part, looks around at all the pristine lawns (“the lawn is an obsession, like a cult,” he says) and sees ecological deserts that feed neither wildlife nor the human soul. “This is a poverty that most of us are not even aware of,” he said."