A visit with Hemingway, the sleepy kitty in the window on 3rd Street 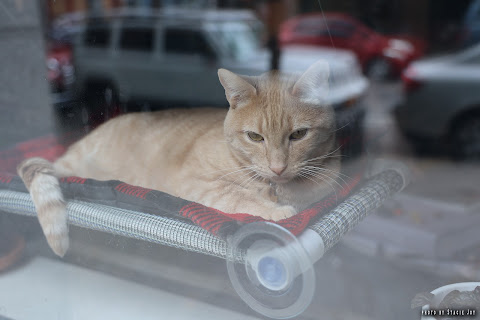 Text and interview by Stacie Joy
We’d long-admired Hemingway’s insouciance as he catnapped in a north-facing window on Third Street between Avenue B and Avenue C... 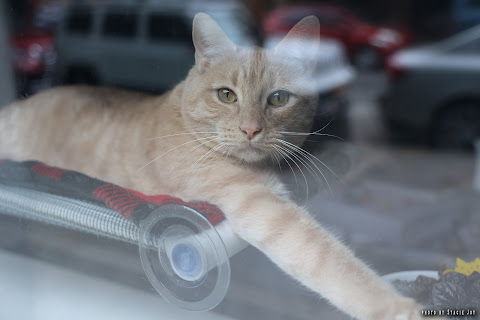 Hemingway’s human companion, Alex Smith, recently granted us an audience with the playful feline and answered some questions as Hemingway allowed himself to be admired. How did Hemingway come to be a window mainstay on Third Street? When did the two of you arrive here and how did his lounging antics start?
We arrived in NYC in April 2021, and the lounger was one of the first things I set up. We moved here from New Orleans, where he used the lounger on our front door in a quiet neighborhood. I honestly didn’t think much about putting the lounger up on the window when we moved in.
Not long after setting it up, he took right to it again, and very soon after, the passersby started, and the phones came out. My mom had come to help us settle in, and we would laugh at everyone’s reactions to Hemingway in the lounger.
What has been the reaction of passersby?
The reactions range from surprise and amazement over the lounger and cuteness of Hemingway — for those who haven’t noticed it/him before — to people slowing down right as they check if he’s in the window. Some people pick up their dogs and bring them up to the window, which I always find hilarious, and Hemi doesn’t mind. I can hear people talking to friends saying, “Oh, wait, come see this cat,” some even call his name after reading it on his collar.
If someone is walking by and on FaceTime, they will flip the phone view to show the person on the phone. The most consistent reaction is smiles. It’s hard not to look at a kitty in a window and not smile.
How does Hemingway react to all the attention?
He loves it. He’s never been a shy cat and seeing the number of people he’s come into contact with over the last year has been so fun. The same children will come to the window every day, and if he’s not at the window, they call for him, and he runs to them. It’s so cute to watch. I also like that it keeps him stimulated. He also loves to sunbathe and nap, which also makes people stop to ooh and ahh. What does he do during his “down time” when he is not lounging in the window?
If he’s not in the window, there’s a good chance he’s either sleeping in his heated bed — I know, I know — playing with his toys or trying to get my attention for treats, pets and playtime.
Best viewing times to see him? Is there anything special he likes or doesn’t like?
You can usually find him in the window from midmorning to around 3 p.m. daily. Sometimes a little later. It also depends on the weather and temperature. He loves when people talk to him through the window. He also enjoys it when people bring their dog up to the window — as long as the dog doesn’t bark too much. 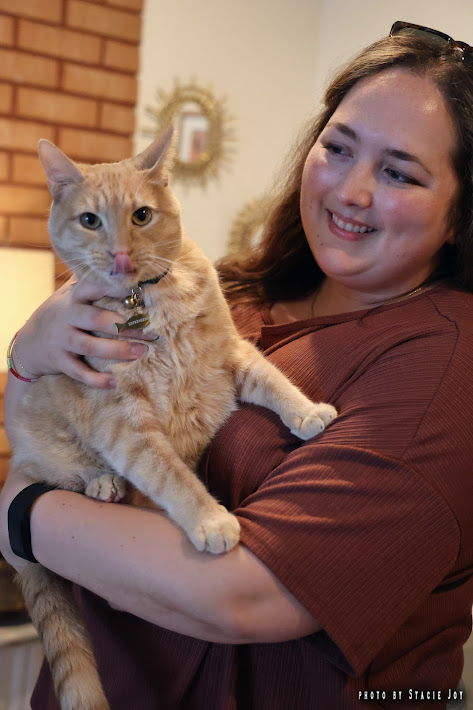 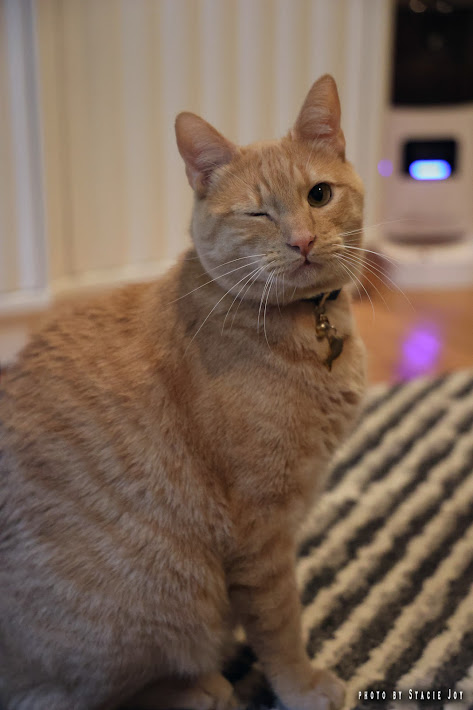 Email ThisBlogThis!Share to TwitterShare to FacebookShare to Pinterest
Labels: A visit to, cats, cool cats, Hemingway the cat, Stacie Joy

Hemi is the best!!

Love this!!!!!!! Thanks again for another terrific interview with great photos Stacie. I miss my gato, Lucie Gato, but he would have loved to have met Hemingway. And yes, kitties rule!!!!!!!!!

Cats could run the world.

Great pics and interview as ever, Stacie Joy. I love the pic of Hemingway winking! lol That lounger is brilliant--- he is one happy and fortunate cat!

And he winks too!..He's truly special!

Hemingway is our grand kitty & he is very loved! He has quite the personality and he lets you know who’s boss! Sometimes when Alex is on the phone he will jump on her arm and nibble her shoulder! It’s so funny we think he is annoyed when we call sometimes!

I think Hemingway and Miss Kita should run for office together. I'd vote for them both.

Orange tabbies are such main characters.