Boot party: Why so many immobilized vehicles in the East Village? 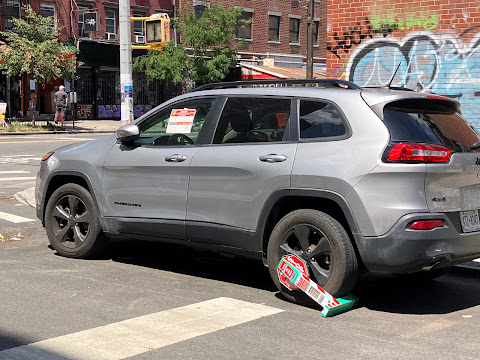 In the past week, we've received multiple reader missives about a high number of vehicle bootings around the East Village.
Reader Carl Bentsen said he saw three boots on one block... and we counted about a dozen or so on a recent walk... 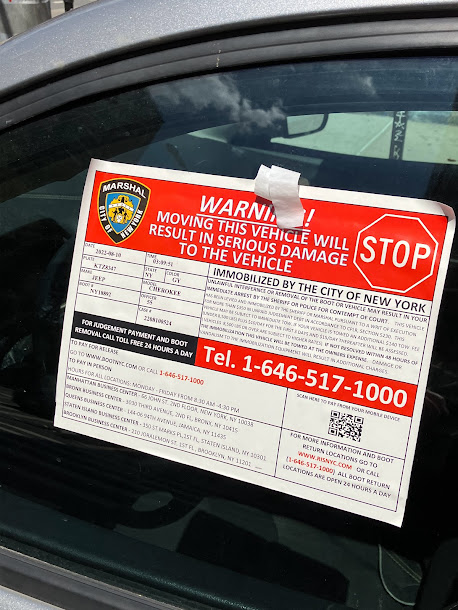 First, why a vehicle's owner might get the boot. According to the NYC Department of Finance:

If you do not pay or dispute your ticket within approximately 100 days, it will go into judgment. This means the City takes the legal step of entering a default judgment against you for the entire amount plus penalties and interest. The City can take steps to collect the debt, such as sending your debt to a collection agency or seizing assets. If you have more than $350 of tickets in judgment, your vehicle could be booted or towed.

And there's this rather jaunty video about how to get one removed...
The Department of Finance reportedly suspended the booting program on March 16, 2020. As Streetsblog reported in the fall of 2020:

According to data provided by Republic Immobilization Services, which currently has the contract to boot the cars of drivers with multiple unpaid parking tickets, the city deactivated between 5,000 and 15,000 cars per month before the COVID-19 pandemic hit.

The Guardian reported yesterday that the city is owed $534.5 million in unpaid parking fines.
Anyway, we don't know at the moment when the boots were returned post-March 2020 ... or why the marshal booted so many in the East Village this past week.
Mayor Koch first introduced the boot... and it went out of favor for some years before making a return in 2013.
Posted by Grieve at 4:50 AM

Email ThisBlogThis!Share to TwitterShare to FacebookShare to Pinterest
Labels: the boot

I noticed it too, but not just here, also in Midtown East. And I'm fine with that.

Yea - Boot the scofflaws - Pay up and stop being LAME

This is great for 2 reasons: Fights the rampant illegal parking, and brings in more revenue, since the city is too lazy to end free parking.

This happens when you don't pay your parking fines.

Serves them right, don't feel bad for them one bit.

I really want the city to ticket cars which park in bike lanes, no flashing lights does not make "ok".

This is why I love living here in the village. I don't need a car whatsoever. If you cannot afford to pay for a parking ticket than you cannot afford to own and maintain a car. Plain and simple. If one allows to escalate it to this level where it is about to be impounded, why should any of us care?

These may be DOF boots but it is worth noting that NYPD traffic agents can boot your car simply based on it being illegally parked. you do NOT need to have $350 in outstanding fines for one of these boots. I've tried to enlighten may to this reality but for some reason people don't want to believe me. Most of the time you're just going to get a ticket but the NYPD can boot your car if they feel like it. These boots don't have a keypad or any convenient way to release them via payment. You will have to visit the impound. It's annoying.

Maggie, you're right that it is annoying. Annoying that the NYPD doesn't use the boots consistently.

Meanwhile the abandoned green van parked on the side of Dunkin Donuts at 1st and 6th is slowly becoming park of the earth. Multiple 311 calls and nothing.

I live on the block. It has not moved since at least May 2021. Even for street cleaning. Same spot. Google maps confirms this.

Saw lots of boots downtown Westside also. They're out to get ya'!

Gray Odyssey parked 4th street between first Avenue and avenue A. Been parked there over 2 years. Florida plates, handicap permit and flat tires. Movies crews couldn't even have that car towed/booted. Previously it was parked on third street in front of PS 63 school for 2 years. Time to get seven on your side!!!!

To paraphrase Cheech and Chong:
F*ck the cars,
But save the Taxi's,,,,

I also live on the block and have filed 311 calls about this van. They are immediately dismissed by the NYPD who illegal parking complaints are addressed to.

Street sweeping went back to twice a week at the beginning of July (after being once a week for the pandemic), so now everyone can get twice as many tickets and you hit that $350 way faster

NYC is no longer getting everything paid for through Fed Covid Funding. Now they are going after every cent they can just like the landlords here.
And as a car owner. I have only received one ticket in 15 years of parking all over the city. I highly recommend paying because the fees are murder.

A lot of haters in these comments but things happen you never know it’s one thing to impound a car but booting just clogs up parking. And is extra distasteful. The amount of people that are ok with the city becoming anti vehicle & nit picking handing out tickets is alarming.

Well at least it's not a barnacle.

Never understood why you would have a car in the city if you didn't have a personal parking space or could afford a garage. The boot, multiple parking tickets along with having to move your car twice a week for street cleaning not to mention the possibility of vandalism can't outweigh the pleasure of owning a vehicle and parking it on the street.

I am one of these people who got the boot. My question to the booted ones is do I still have to sit in my car during street cleaning to avoid getting a parking ticket? Getting the boot off might take me another week... It's complicated. Do they ticket booted cars? Thanks.

re: anon 10:43, I got booted too. Woke up to it yesterday morning. The notice from the marshall said if you don't pay within 48 hours, you'll get towed and impounded. I'd recommend taking care of it before the next alternate side day, i.e., you'll get towed before then.

I've been booted on ST Marks for 3 weeks now. I need them to tow my car!

I can't believe how many people are in favor of booting people's cars like we've never been through a pandemic and inflation is killing almost everyone... what a fake society this is ..

Please take some time out to place yourself in someone else's shoes....

It’s obvious that Mayor Adams is doing everything he can to raise revenue by suddenly enforcing every law on the books that leads to a hefty fine. I have seen these car boots all over town, and have seen the scofflaw patrol cars with special decals out in force. There is also a crackdown on people riding on the Select Bus for free. I watched an 8 man team taking 3-5 people off of very crosstown bus on 34th Street and handing out fines. Cops are fining cyclists for not wearing helmets and for hanging a bag on the handlebars.

Note that none of this is about public education or changing behavior; Mayor Adams wants us to misbehave so he can hand out more fines, even as the trash piles up, the Subways become more dangerous, and Tompkins Square and Washington Square Parks become unusable.

Remember when Eric Adams said he would be the law and order Mayor? It turns out that the only thing a former cop really knows what to do is how to hand out more tickets.

Happened to me- It's kind of sad how many people are praising the city for this wild new level of enforcement. Parking tickets are already vindictively high, so it doesn't take that much for the sheriff to come down and cripple your transport for a payout(and its done in the dead of night, to ensure you'll be late for work).