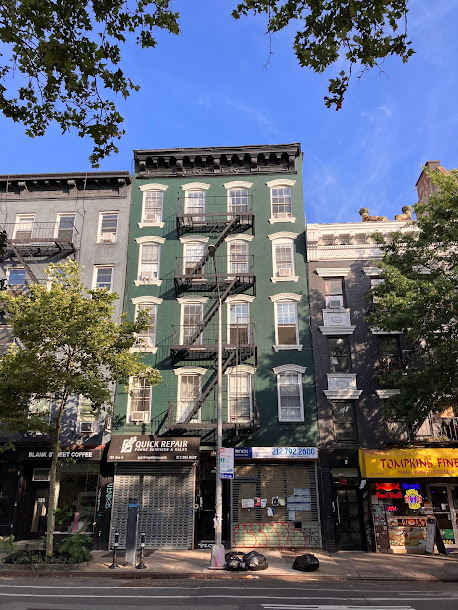 Renovations continue inside the north storefront at 151 Avenue A, where the first NYC outpost of Miami-based pop-up hit El Primo Red Tacos is in the works here between Ninth Street and 10th Street.
As the name suggests, El Primo specializes in "red tacos," which Eater Miami describes as "birria tacos dipped in a soup-like liquid that gives them a red glow."
And more from Eater:

El Primo "focuses on one thing only: birria, beef shoulder that is slow cooked in a “red” stew made with tomatoes and seasonings. The chefs then fill tacos with the beef, which also stains the tortilla giving them that red color, and then serves it with a side of broth made with the birria cooking liquid to dip the tacos in."

Reps for owner Frank Neri, who hails from Tijuana, will appear before CB3's SLA committee on Aug. 22 for a new liquor license for the space. According to the questionnaire on file with CB3, the quick-serve spot will have seating for 10 guests inside. They also plan on getting the backyard space licensed, which could accommodate 28 people. Proposed hours: 11 a.m. to 2 a.m. Sunday through Wednesday, with a 3 a.m. close Thursday through Saturday. (The outdoor space would close at 10 p.m., per the questionnaire.)
The questionnaire includes a menu from Miami... 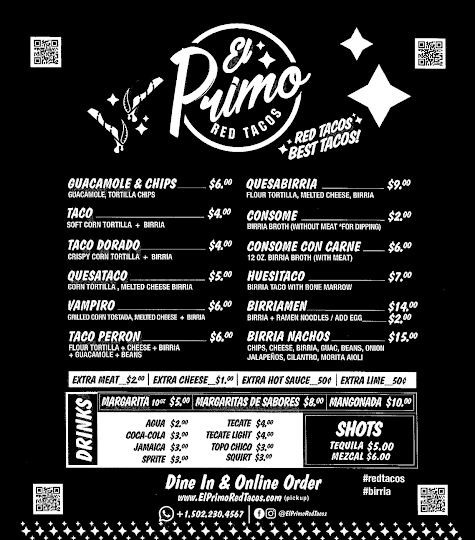 El Primo's Instagram account lists a September opening for the East Village.
The CB3 SLA meeting starts at 6:30 p.m. on Aug. 22. You can tune in via Zoom here.
This north storefront at 151 Avenue A has been vacant since Mamani Pizza, a 99-cent slice joint, closed in June 2017. (Because someone will mention it: San Loco was in the south storefront at No. 151 until February 2014.)
Posted by Grieve at 5:05 AM

We need good birria in the neighborhoood - wishing them luck

This sounds epic. I'm sure people will complain about the hours, but the menu looks awesome and a fun spot. Excited for this place.

This neighborhood is dying from late-night “vibrancy”, i.e. out of area booze-seeking partyers.

I think both the full liquor license and the use of the backyard will face major challenges.Beer and wine no problem but this part of avenue A is already considered over saturated by CB3. As for the backyard, I'm part of a block association around the corner on 9th Street and we successfully prevented a restaurant who wanted to make use of the backyard. I believe there are regulations against it but cannot remember , it has been a number of years

let’s see you make a marg from beer and wine

Might the "red glow" just be lots of achiote?
There are at least 3 birria places in the area. With some luck we will see birria storefronts at the magnitude of poke soon.

Isn't prime birria made with goat or mutton?

FWIW, El Primo Red Tacos is on the CB 3 SLA agenda for a beer & wine license, not full liquor. All license types are listed as "new liquor licenses".

Idk, $5 Tequila sounds in that spot seems like trouble on the regular. Come for the nachos, stay for the shitshow.

$3.00 for a soda! The price on drinks (non-alcoholic) is a sign/warning overpriced.
I'll stick to Taco Bell. McDonalds for my 99 cent any size soda.

Many of the residents on the block concerned are opposed to this business getting a permit for rear garden dining and drinking space. This would be a major disruption of peace and quiet in the neighborhood. Rear gardens should be prioritized for residents, and not commercial operations.