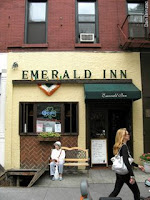 The Emerald Inn, the Upper West Side saloon that has been serving up drinks since FDR was in office, will live. And you can thank the recession for it.

In September, manager Charlie Campbell learned that rent would double to nearly $35,000 a month for its 800-square-foot space on Columbus Avenue near 69th Street. (Sidenote: How did he learn of this? He saw the location advertised for lease on the Web site of real estate brokerage CB Richard Ellis. Nice!)

Anyway, according to the Times today:

Like so many other stalwart-but-doomed Manhattan holdouts that have lost their leases under the pressure of gentrification, the Emerald — as its habitués call it — was scheduled to close at the end of April; its rent was to more than double.

But the watering hole . . . has won a two-year lease extension thanks to “the whole down economy, where they can’t find a tenant who will pay that much,” said Mike Campbell, 77, the Emerald’s owner.

Indeed, the reprieve “has to do with the economy — and the kind of people the Campbells are,” said Mike Clarke, an owner of the A. J. Clarke Real Estate Corporation, which manages the five-story apartment building in which the Emerald resides. Mr. Campbell’s son Charlie, 49, manages the bar.

As one patron said, "Columbus Avenue has been turning into a strip mall, with chain stores and restaurants. Maybe the recession will help the mom-and-pops stay in business.”

Finally, a little history on the place via the Times:

Mike Campbell’s father (also Mike) opened the Emerald with his brother William. “Exactly when, we’re not sure, but it was 1943 or 1944,” Charlie Campbell said.

The Emerald has been an enduring link to the West Side’s raffish past, when Columbus and Amsterdam Avenues were populated by gin mills and where brawls among patrons, enthusiastically mediated by bruiser bartenders, were not unusual.

“We were called Spanish Harlem until the ’60s, when they put in Lincoln Center,” said Charlie Campbell. In recent decades, the clientele has gone upscale, to professionals who can afford Upper West Side housing, along with a sprinkling of loyal locals, some of them survivors of the era when “West Side Story” was a contemporary narrative.

Previous Emerald coverage on EV Grieve here.
Posted by Grieve at 7:19 AM

Email ThisBlogThis!Share to TwitterShare to FacebookShare to Pinterest
Labels: great bars, the Emerald Inn, Upper West Side, what am I doing on the Upper West Side