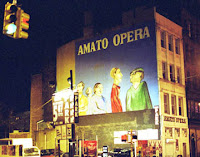 After 60 years the Amato Opera will close its doors after this season. Anthony Amato, the company’s 88-year-old founder, gave the news to his company before Saturday night’s performance of “The Merry Widow.” Mr. Amato said he had sold the opera’s building on the Bowery in the East Village. (New York Times)

Founded in 1948 by Tony and Sally Amato (she passed away in 2000), the Opera has called 319 Bowery home since 1964. Here's an excerpt on the Amato Opera that appears on its Web site. From an article written by Sondra Zuckerman Diaz:

Amato Opera opened originally with two goals in mind: to present entertaining opera at popular prices, and to give singers a stage on which to gain much-needed experience in full-length productions. The early company utilized students from Tony Amato's opera classes. ... Early performances were free because union regulations would not allow them to charge admission. Contributions were requested during intermission. Tony Amato had invested his own money to get the company started. At 319 Bowery, when admission could be charged, tickets were $1.20 an reserved seats, $1.80. In 1975, 15 years later, ticket prices were only $3-4 a performances. Today, at only $23 for an orchestra seat, ticket prices are still a fraction of what is charged at other opera houses. Amato is believed to be the only self-sustaining opera house in the United States. ... The Amato Opera is often referred to as a "mom and pop" operation.

Here's a video created by Columbia Graduate School of Journalism students on the Bowery Poetry Club and the Amato Opera.(The Opera portion begins around the one-minute mark.)

Jeremiah has more on the Amato from last January.
Posted by Grieve at 7:03 AM

Email ThisBlogThis!Share to TwitterShare to FacebookShare to Pinterest
Labels: Amato Opera, the apocalypse, the Bowery