As I mentioned last Monday, a new bar has opened in the former Mo Pitkin's space at 34 Avenue A. I was told that the building was purchased by the folks behind the fratty Yorkville saloon Aces & Eights. Now, rather temporary-looking signage is up... 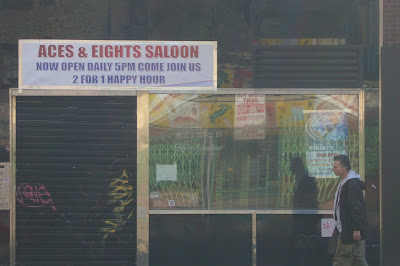 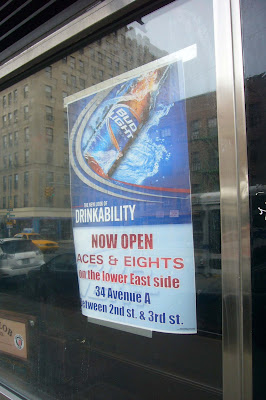 No indication yet how the performance space upstairs will be utilized. (Beer pong tourneys?) Something tells me that you won't be seeing, say, Kiki & Herb or Murray Hill headlining anytime soon...The 2-for-1 happy hour is in keeping with the four other bars on the next block -- Double Down, Kelly's, Nice Guy Eddie's and The Library -- that have the same deal.

Meanwhile, add futurist to the skills of former Mo's regular Ben Lerman. The ukulele-playing comedian had this to say to New York magazine in September 2007 upon hearing the news that Mo's was for sale:

“Like Brownies, Fez, Sin-é, Tonic, and many others before, Mo’s will be just another arts venue replaced by yet another bland, chic meat-market with delicious mojitos. The people moving into the town don’t want live entertainment. They just want to get hammered and drag someone home to their luxury condo. Which, when you put it that way, actually doesn’t sound so bad.”

FUCK. FUCK THIS. I HOPE THEY ALL DIE.

At least it's not another empty space in the neighborhood...let "them" spend their cash at the bar, purchase cigs and a 40 at the corner shop, grab a slice of pizza, and hail a cab back home. Right there you have four businesses making money in a rather hard time.