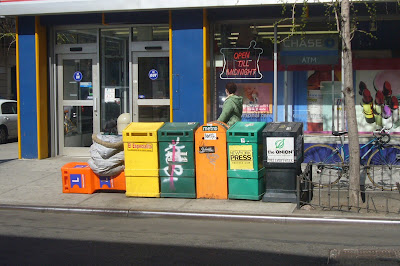 Friday night on Avenue A (Neither More Nor Less)

Remembering Johnny Thunders (This Ain't the Summer of Love)

Sicha and Balk launch The Awl (The Awl)

"On the first Saturday that New York's brand new stadia were open for regular season baseball business -- and on a beautiful day, too -- there were more than 7,000 unsold seats in Yankee Stadium, more than 5,000 in Citi Field. When parks such as Camden Yards, Coors Field and Jacobs Field opened, they sold out, over and over, again and again. That's because fans were treated as logical humans, embraced as customers and not targeted for muggings. (Phil Mushnick, New York Post)

The party buses were out Saturday night.

Must be loudmouth season. (Jeremiah's Vanishing NY)
Posted by Grieve at 12:40 PM