Been meaning to do a post on Olivo's Fashions, a homey and unusual little shop at 55 Avenue C near Fourth Street. It has been here for 36 years, and is a father-son operation. Part of the store is devoted to yarn and fabrics and other things sewing related.

In 2007, though, the store started to be more known as a serious place for video games. In fact, just last Tuesday, Crispy Gamer did a feature on the place titled, "World's Greatest Independent Game Stores: Olivo's Games Depot."

As the second deck of the headline reads, "Welcome to pretty much the only place on earth where you can buy skeins of yarn, adult diapers and a still-shrinkwrapped copy of Rez ($99.99)."

Here's an excerpt from the article, which nicely captures the vibe of Olivo's:

The store is one of those rare, old-time New York places that are almost impossible to find these days. Two-thirds of the store is devoted to yarn, knitting, mannequins, candles, homemade lollipops, porcelain hands designed to hold your rings, and blouses. It's like a thousand five-and-dime stores crammed into 600 square feet. The remaining third -- the front corner of the store -- is devoted to videogames. 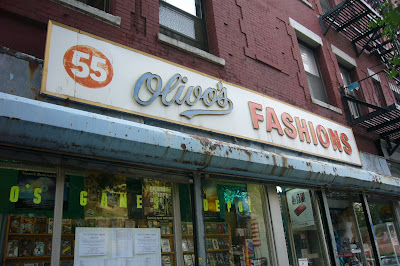 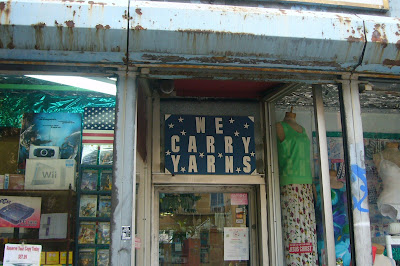 And now I buried my lead...I was dismayed to walk by Saturday to see the following... 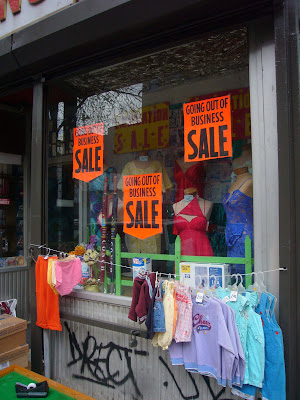 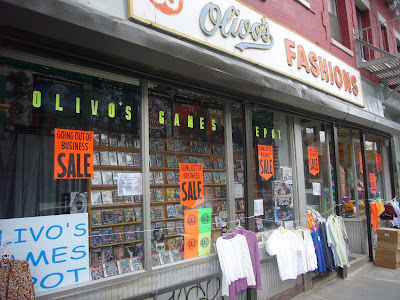 The elder Mr. Olivo, I believe, was hanging garmets outside on Saturday morning. He said they were closing and had to have everything out of the store. There seemed to be a sense of urgency to this. I went back yesterday to take some photos of the interior and, I hoped, to talk with one of the Olivos. Unfortunately, the gates were down. I'm afraid I'm too late.
Posted by Grieve at 7:10 AM

i love that signage...

yeah, signage is great. wish i hadn't missed this one.

Haven't been down that way in some time, but that's where I bought all my yarn supplies. Will be a shame to see him go.

It is sad they are closing after 36 years in business.

Oh No! That's also the place where the kids buy their homemade "icies" (frozen cups of shaved ice and sugar dayglo dyes- the best in the LES). You could also order pasteles (a Puerto Rican version of tamales) frozen to go by the dozen. This is a major blow.

I bought a ps3 controller here once and was very glad I stopped in. I believe I bought it from the son, who reminded me that they offer a free can of soda with every game purchase.