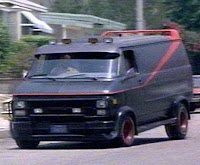 Cops who busted a dumb-as-chum crook suspected of trying to steal an ATM won't have trouble finding the loot from his previous heists -- he used his one call from the station house to contact a friend and blurt out: "Get all of the cash out from my mattress!" sources said yesterday.

The bizarre saga -- which included a dip in the East River -- began when Valentin Garcia attempted to swipe the cash machine outside a store at 23 Rutgers St. on the Lower East Side by knocking it from its foundation with his van, the sources said.

Cops said Garcia is also the prime suspect in a rash of other knock-over ATM thefts around the city, including the LES, in December and January.
Posted by Grieve at 6:59 AM

An intern or an A-team Van?