At the same time we notice that the new 18-story glassy condo is finally (and quickly) taking some shape on the southeast corner of 14th Street and Third Avenue... 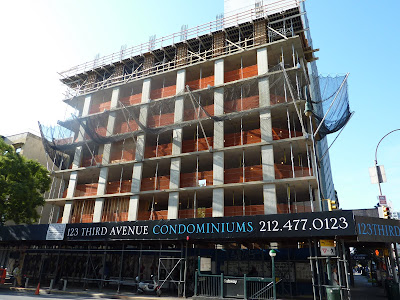 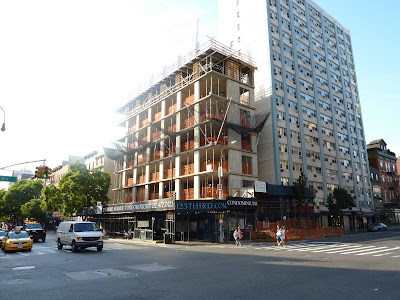 (No Web address listed. But a phone number. Handy!) 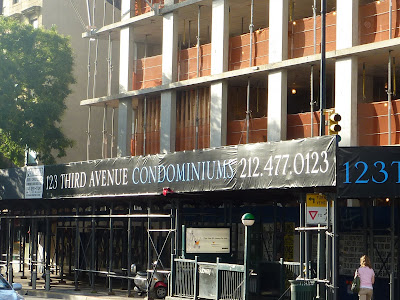 ...the Times comes along with a piece saying that basically all of 14th Street east of Third Avenue is pretty much doomed now. As the paper notes rather ominously.

Still, the stretch bordering the East Village, east of Third Avenue, existed as a relative time capsule. Discount clothing stores still dot blocks as they did when the area was a popular middle-class shopping district, side by side with 100-year-old brick tenements.

But stirrings of change are noticeable in the neighborhood, say brokers, business leaders and developers, many of whom are betting that renewal will continue its march along 14th Street.

A 19-story condominium rising at Third Avenue from the site of a former tanning salon may be a sign.

The article goes on to say how much the condos will cost, that a Capital One is going in the retail space on the ground level, etc. Doomed as doomed can be. 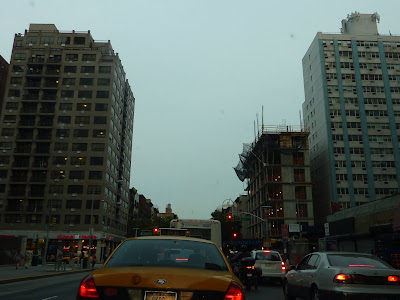 Previously on EV Grieve:
Stopping work at 123 Third Ave.
Posted by Grieve at 7:02 AM

These photos make me want to cry :(

There is no Lower East Side, there is no Bowery, there is no Manhattan belonging to the people... Has been taken over by the rich wealthy land owners who drove the poor out of town. So sad, so sad, so very, very sad :(((