325 Bowery gets scrubbed and painted

Over at 325 Bowery at Second Street, which was most recently Kelley & Ping...the construction netting came down this week... 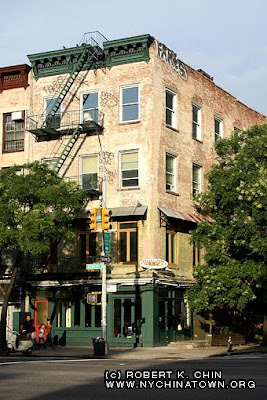 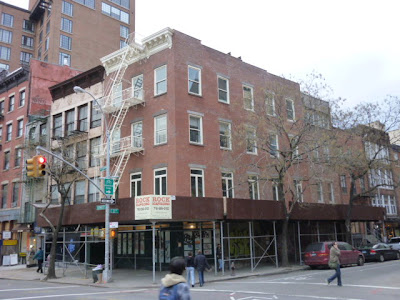 Perhaps in anticipation of the yet-unnamed eatery by Freemans bros Taavo Somer and William Tigertt? A bilevel bar and eatery are in the works here... 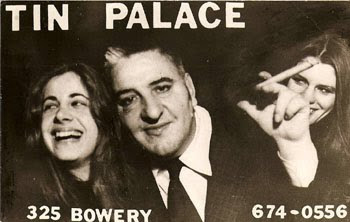 From 1970-1975, as New York Songlines notes, this space was The Tin Palace, a noted jazz club .... it became a go-go joint in 1975. It reopened for a time as a jazz club in 1978, with critic Stanley Crouch doing the booking. Read more about The Tin Palace here at Perfect Sound Forever.

[Top photo by Robert Chin via. Tin Palace ad via ]
Posted by Grieve at 6:50 AM

Here's a piece a friend of mine wrote about the Tin Palace: http://www.furious.com/PERFECT/tinpalace.html

Karate Boogaloo: Thanks so much for that link. I also very much appreciated the piece there on TR3. I had not remembered that it was such a short-lived place.

If you're curious about Andy Schwartz, who wrote those stories, you can find him here: http://nyrocker.com which was a magazine he used to be the editor of. He was also interviewed by Jeremiah once as his family owns the building on 2nd Ave that housed the Schwartz & Son funeral parlor for many years. Good stuff!

I worked at the Tin Palace -right up through the time a new owner took over in 1977 and a little bit there after- it was never a "go go joint"-
it remained a jazz club until it closed. It was an amazing place to hang out in, play music, and even to wait tables.

I tended the bar there late 70s until the end. I was a customer before that and my friends were before I was. As far as I know, it was NEVER a go go place. It always was a jazz club. And I had the most amazing regular customers!