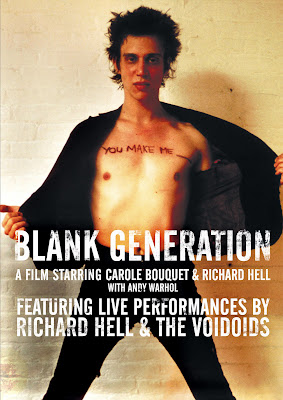 Finally on DVD is the classic punk rock movie from 1980 starring Richard Hell, illustrating the end of the first wave of New York City punk rock better than any documentary. Nada (Carole Bouquet), a beautiful French journalist on assignment in New York, records the life and work of an up and coming punk rock star, Billy (Richard Hell). Soon she enters into a volatile relationship with him and must decide whether to continue with it, or return to her lover, a fellow journalist trying to track down the elusive Andy Warhol (playing himself). Featuring members of the Voidoids and the Ramones.

This long lost film is like a time capsule from pre-Disneynification New York City: sleazy, dirty and most importantly, real. The DVD package includes a lengthy new interview with Hell about the film and more.

Richard Hell states: "This is a priceless package. The real burnt-out New York in January and February 1978, the Voidoids live at CBGB, Ed Lachman's cinematography, Elliot Goldenthal's sound track, Carole Bouquet's face, my lithe figure, Andy Warhol to break your heart, Luc Sante demonically extracting the ugly truths from me re: the horror of it all (bonus feature which is better than the movie itself)...unique."

And here's the trailer...

Updated: A reader pointed out an interview that Hell did with The Wall Street Journal's Speakeasy blog last week... in which Hell trashes the film. Here's an excerpt:

As with many cultural artifacts dating from a fetishized period (in this case the late ’70s New York punk scene), the film is hailed on the cover as "a classic punk rock movie" and "better than any documentary." That's not how its star sees things. "It's just completely incoherent," Richard Hell said of the movie... He talked with Speakeasy about the bewildering experience of making – and re-watching — "Blank Generation."

Why did you participate with the DVD release if you hate the film?

It was going to come out anyway. It was good to have the opportunity to explain the conditions under which it was made. It does have a certain value as this eccentric artifact of this time and place. And it’s the best existing film footage of my band at a time when it was in top condition.

You’ve been in several films since then. What did “Blank Generation” teach you about acting?

Classic! This makes me want to see it even more! I guess this is why the publicist for the DVD said "no one was available" for interviews about the re-release.

P.S.
Not to be confused with Amos Poe's documentary "Blank Generation."
Posted by Grieve at 7:01 AM

Looks great - I'll have a copy in my posession by the end of the week.

Hell's opinion of the movie is a little more complex than that blurb by him might suggest. He spends his entire bonus-feature interview on the DVD trashing the flick. See the interview at The Wall Street Journal he did about the movie: http://blogs.wsj.com/speakeasy/2010/02/23/blank-generation-star-richard-hell-on-punk-films-dvd-release/

Thanks, anon... I missed that interview. I added some to the post...

Here's pretty much the entire Poe film on Stupefaction: http://theworldsamess.blogspot.com/2009/08/blank-generation.html

As for this Blank Generation, it's been out on DVD for AGES, and it hasn't been difficult to find if one was looking. MVD is just trying to stir up some PR.

And Hell is right...it isn't very good, but the performance footage is excellent.