First, you have Paul's, who has claimed "NYC's best burger." 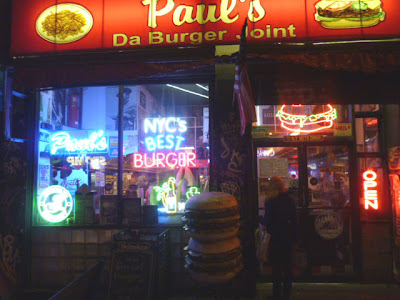 Not to be outdone, across the way, Dallas BBQ is claiming it has "New York's most popular half pound burger." 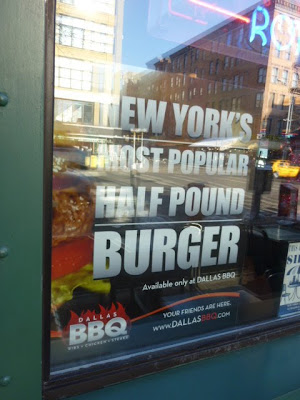 And a little south on Seventh Street, Song 7.2 says it has "the best burger in NYC." 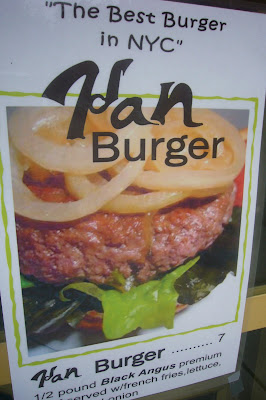 Perhaps they do. It just doesn't look like it. For starters, I like for my hamburger to look as if it already hasn't been digested. However! A Hamburger Today took one for a test drive last fall...And Robyn Lee wrote:

While this burger may not be the best in the city and wouldn't fulfill a craving for a regular burger lacking seasonings up the wazoo, it's one of the tastiest takes on a burger I've had and a great deal for only $7. I'd definitely eat it again.

I took at lady to Paul's for a burger once and while I love the place, I don't think the dusty neon on the ceiling or the grease in the air makes for the best date ambiance... However, ...mmm those burgers.

Everyone should experience Paul's at least once, but I gotta go with Blue 9 for yummiest (and a good deal).

Never was too crazy about Paul's burgers. I always go with their tuna melt.

Paul's is still king (turkey burger with onions and jack, side o' pickles), but if you haven't checked out the sliders at St.Marks Burger (see next post), it's worth a stop in.

I like Paul's, but I really have to be in the mood for one of those huge burgers.... I always hear such great things about Blue 9... Never seems quite as good as I'd like it to be.

My fave burger on 2nd ave would have to be at Veselka. Probably good that there's no "best burger" sign in their window...:)

Blue 9 is good but it's fucking ghetto and they don't put care into the burgers most of the time. They have so much more potential. I like Epstein's cheeseburgers best, as far as walking distance to me

Paul's Turkey Burgers...best I've ever had.

Well, I haven't had a turkey burger from Paul's in eons... I need to pey them a visit soon...

Paul's STEAMS their burgers under an upside metal sundae cup. Gloppy and gray. At least Veselka now grills them: they're incredibly greasy and the buns are incredibly tough. What news on those new burger places you mentioned were opening on 1st Ave?

I haven't seen much activity on those two coming-soon burger joints on First Ave... am keeping an eye out, though.

for me, nothing compares to paulies. but i do think all the polish diners have good burgers.

That does it! I'm going to Paul's right now!

Veselka's is the tastiest cheeseburger in the area. It has some issues with the accoutrements but the patty has that tasty backyard cookout flavor and aroma that I'm a sucker for.

The Korean burger is just decent. Their best burger claim is outrageous and should not be taken serious, nor should Paul's. I'd take the burger and fries at cafe orlin over these two any day, so should you.