Nearly one year has passed since first hearing about the reconstruction of East Houston from the Bowery to the FDR. The plan calls for the widening of sidewalks, enlarging of medians, installating new pavement markings and bicycle lanes from Second Avenue to FDR Drive and creating two new plaza areas.

EV Grieve reader Elliot noted that some prep work has begun. For instance, the M21 stop on the northeast corner of Avenue A and Houston has been moved to the middle of the cab stand on First Street and Houston. "Really not a good place for a bus stop," he said. Indeed. 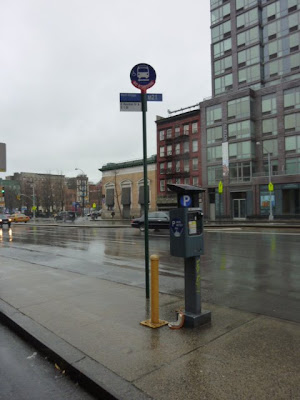 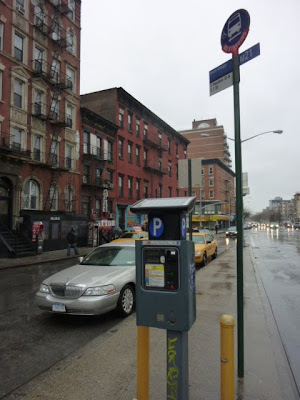 "Not looking forward to having the street all torn up like it's been further west on Houston for so long, but I guess it will be nice when it's done..."

The Lo-Down had a report last week on just what's happening here:

A sweeping reconstruction of Houston from the Bowery to the East River. In the second phase of a project that began on the West Side, the city will rebuild the entire street, including sewer lines, sidewalks and the roadway itself. They will also install new greenways and bike lanes. The work will begin in a few weeks and continue for three years. Expect lane closures, street closures and a lot of noise and dust. The Department of Design and Construction said they were committed to working with residents to minimize the inconveniences. They’re even installing "Rodent Control Stations."

I wish they would just close it off or something on the weekends during this construction. This will only increase the endless horn honking late Friday and Saturday nights,

man, this is gonna be hell.

oh great. i'm on 1st and 1st. should be a lovely three years.

3 years. did it take them that long to do the other side? didn't seem like 3 years...