The Save Ray's clothing and accessories line

East Village resident Conrad Oakey designed the Save Ray's logo for the flyers promoting tonight's Save Ray's benefit at the Theater For The New City on First Avenue... Oakey says the image is taken from a photo of Ray holding up the the cover of the Daily News in the days after Sept. 11, 2001... 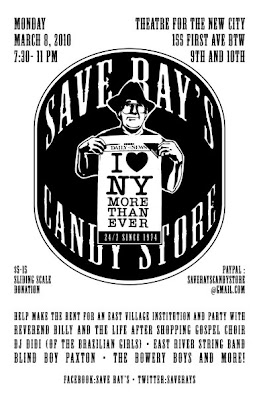 "I got to know Ray first by becoming addicted to his frozen yogurt, then later by setting him up with Internet access," Oakey says. "I've never seen anyone take such joy in the access to the world the Web provides.

"When he told me about his troubles making rent, I started thinking about what how iconic he is ... and how having some T-shirts around to sell to his late night following would give him another revenue stream."

Now, in another fund-raising effort for Ray's, Oakey and Matt Rosen teamed up to incorporate the Save Ray's image and launch a line of Save Ray's clothing and accessories at Cafe Press. There are more than 80 items for sale. (Including the Save Ray's "classic thong.") 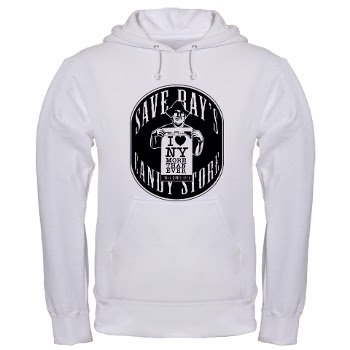 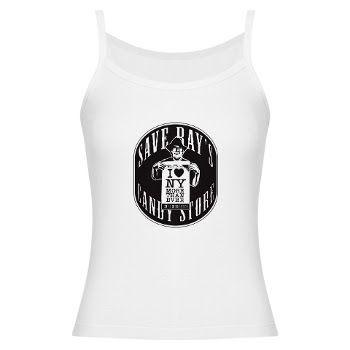 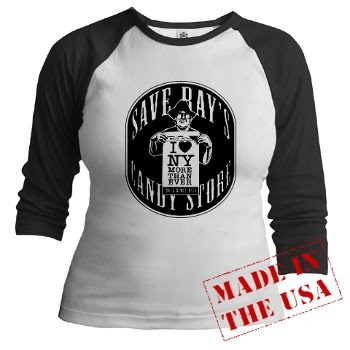 Rosen, who moderates the East Village Neighborhoodr blog, says Ray gets 100 percent of the "markup" on each item sold. (So, if a T-shirt has a wholesale/base cost of $8, and is sold for $12, Ray gets $4.) As Rosen notes, the benefit of using CafePress is that neither Ray or anybody else has to put up any money up front to purchase the inventory and then worry about selling it afterward. CafePress sends out checks once sales reach a certain amount.

"I'll just keep track and hand Ray the money as it comes in," Rosen says. "Hopefully this really takes off. Aside from the fund-raising aspects, it's a neat way for people to show their support."

There will be several of the clothing items available for purchase tonight at the benefit. 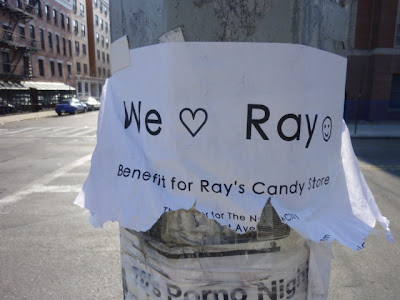 As for tonight, Rev. Billy and the Life After Shopping Gospel Choir will be one of the many groups performing. I asked Rev. Billy why Ray's is important to the East Village. He responded, via e-mail:

A healthy neighborhood feels good, it's funky, it's real and it's love! Our neighborhoods are not for sale: we must protect local shops like Ray's, which allow us to encounter each other and share and create stories with each other in a community!

The picture of Ray holding up the Daily News from which the poster image is derived was shot by Red Ed . ED was a longtime member of Ray's community .Among numerous other activities , including an interactive website before most had any idea of what such a thing was , Red Ed produced a cable access TV program from Ray's .This was all a long time ago ,ancient history . .Not sure but I think that Red Ed is or was in either Minnesota or California these days .

Many years ago Red Ed tried to get a T-shirt business going for Ray using this image .

Anyone know how to get hold of Ed?

Would be great to get him a shirt.

you know what? i went by Rays tonight and i realized: someone's gotta paint that crappy wooden marquee over his store. it's all just stained and peeling right now, and if somebody from outside the 'hood heard about this story and wanted to come down and buy something, they might have a hard time figuring it out. i think the artwork that's being used on the shirts should get painted up on the signage. at least the words "Ray's Candy Store"

thanks for posting grieve! just bought a tote!

You're welcome, Glamma... Thanks to Matt and Conrad!

Thank YOU! And tell your friends!

Rode by on my bike and thought the same thing.

However, just spoke with Ray and he learned on Monday that construction is about to begin on the facade of his building. The awning may have to come down in the meantime, so hold that thought for now, I guess. Not the best timing for this sort of work to be done at all...

Wrote more about it here:

Ray’s building to get a “facelift,” but will it be uplifting for business?