Tearing up the Telephone

If you were a fan of the Telephone Bar and Grill on Second Avenue, then you may want to avoid looking at this photo... I caught a glimpse inside the bar, which closed at the end of January. Looks as if the new owners are doing a complete gut renovation of the space... they've already auctioned off most of the old fixtures and equipment.... 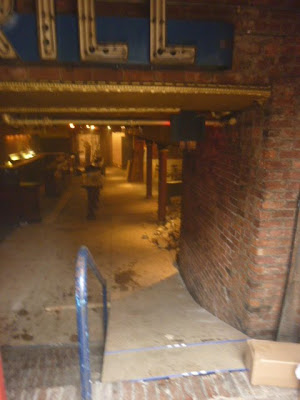 The bar is still there, but little else remains. And on the right is a pile of what can be best described as rubble...

Ringing in the 13th Step: Old Telephone Bar will lose its Telephones
Posted by Grieve at 6:52 AM

Very sad. But now it looks as it did before the Telephone moved in, when it was a seafood (?) restaurant with really cool old antique tables and stuff. Or am I hallucinating?