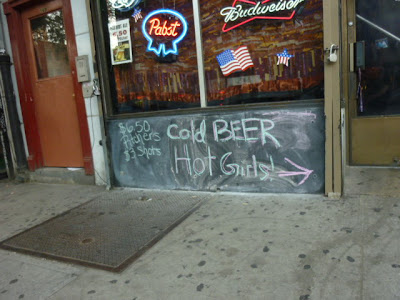 Cheap Shots was first up last night on the CB3/SLA docket.... Back in June, the fuzz busted the First Avenue joint for allegedly serving minors... (and I thought the new incarnation was to be called Spanky and Darla's? Well, no matter... this wasn't mentioned... )

The bar's attorney was there, as was the newish owner ... she also owns the lost bra parlor the Patriot Saloon down on Chambers (where they were hiring "shameless slut bartenders" — woo!) ... anyway, the kindly lawyer, who struck me as a little grandfatherly, discussed how the bar has been trying to change its image.... with a straight face, the lawyer said Cheap Shots had a reputation for being "a young person's bar."

So! The management:
• Removed all the video games
• Cleaned off all the graffiti from the interior
• Changed the jukebox
• Added soundproofing
• Removed the all-you-can-drink-for-free special for people who were celebrating their birthday
• Stopped serving pitchers of beer with shots in them (truck bombs! Woo!)

(I haven't been here since the spring or so, so I can't independently verify any of these claims...)

And so on... There have been four recent complaints under the new ownership....one in December, two in March and one in June... But the owner said that they've had friendly discussions with neighbors... and helped rectify noise problems... Per the underage bust, they now have two bouncers working on weekends and an ID scanner... two residents spoke out against the bar... one resident said that she felt uncomfortable walking by the bar when the patrons are outside smoking. She said she found their body language — unpleasant.

The owner seemed genuenly concerned upon hearing this... A CB3 board member suggested that the bar figure out a sidewalk traffic control system, perhaps adding a corral to keep people more separated from passersby....

In the end, the committee approved a license renewal for Cheap Shots...

After hearing about the bar's efforts to be less youth friendly, I decided to walk by after the meeting... and here's the sign greeting folks on the sidewalk... 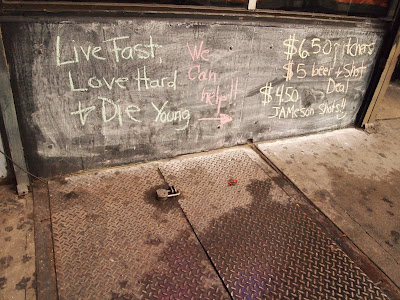 We can help you die young...just stumble drunkenly out of the bar into the bike lane right outside!

The bike lane is on the other side of the street.

I thought Tom McNeill owned Cheap Shots and The Patriot (and the lamented Village Idiot). Did he sell or turn over to a family member or something?

I thought Tom owned them as well.... I believe it was said that the woman at the meeting last night took over Cheapshots in December...

I was at Cheap Shots, one of my favorite bars, last summer. It was hot and sticky and the locals were out in full force. Punks, Puerto Ricans, Hells Angels, at least two strung out junkies begging for cigs, and everything in between.

My lady friend at the time was a bit of a bad drunk, and started making out with some random girl. This was a first for me, and took me a bit by surprise, but I wasn't complaining.

A young dude approached me and said "Is that your girl? I said, "Yah."

He said "She's making out with my girlfriend." and then demanded I buy him a beer. He was obviously broke, but I declined as he was just a kid who couldn't have been more than 19.

He pulled me to the back and said "Lemme show ya this in the back, yo son lookit right herea..." and I thought he was going to show me the games in the back, which I was well aware of, but instead showed me a .38 chrome revolver, tucked neatly in the front of his loose fitting jeans, with a black leather belt holding everything in place.

The gun looked battered and I thought maybe he found it, so I kind of looked at him and thought for a $7 beer? and said, "I ain't worth that, man!!!"

But his buds were looking at him, a few of them had followed us to the back, and when someone doesn't want to lose face, they can do stupid stuff. Like kill me for no reason. It happens everyday in NY.

So I said, "Alright then, how about a Blue Moon?" and he didn't even respond, as if he was thinking of course you're getting me a beer.

Like an idiot he actually hung around after. You pull a gun on me and you hang around? I coulda made one phone call or txt and he'd been looking at 3 years right there!

But I didn't because I was 19 once and just as stupid.

I went back to Cheap Shots lots of times after that - I've had problems before but always made it through. I liked Cheap Shots for that. Cheap thrills, I guess. You never know what can happen in there.

But a few months later, Cheap Shots cleaned the whole place up. Graffiti, gone. Jukebox, gone. Picnic tables, gone. Cool-ass local people who don't give a sh** about anything or anyone, mostly... gone.

The whole seedy vibe of the place vanished in a few coats of paint and some neon. It was as if 1979 quickly vanished and 1998 had come in, uninvited.

I haven't been back since.

So they removed everything that was appealing.