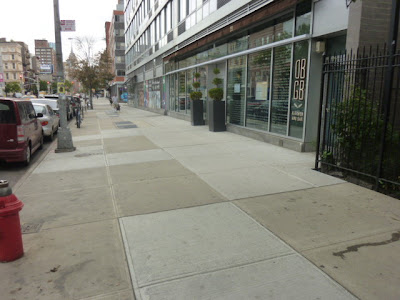 Also on the CB3/SLA agenda last night — two applications for sidewalk cafes..... First up, Penny Farthing on Third Avenue and 13th Street.... The former restaurant here, Cafe DeVille, had a sidewalk cafe...In addition to nine tables (18 seats) on Third Avenue, Penny Farthing will have four tables (eight seats) on 13th Street.... The hours: Noon to 10 p.m. Sunday through Thursdays; to 11 p.m. on Friday and Saturday. Not much discussion... People seem to like this place... and it was quickly approved....

Then! Team DBGB took the stand, the lawyers with by far the best-looking suits in the audience. (Actually only one lawyer took the stand; the other two sat in the back.) Head DBGBer Daniel Boulud was not in attendance, by the way... So the DBGB sidewalk cafe plans to have 15 tables (30 seats) on the Bowery... with some kind of self-supporting grates as barriers... Hours of operation: Noon to 11 p.m. Monday through Thursday; till midnight on Friday and Saturday; and 10 p.m. on Sunday.

The committee quickly gave their approval, with someone even throwing in a gratuitous Daniel Boulud compliment... 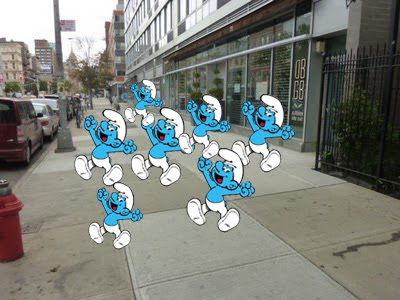 that Smurf image is exactly what it will look like. enough with the sidewalk cafes. it's hard enough to walk down the street as it is.

Flash back 100 years and there were women jumping to their deaths on this very sidewalk. I wonder what will be happening here 100 years from now.

Given how quickly things are changing along this corridor, I'm even curious how different it will look in 10 years...

perhaps those bikers that love to ride on sidewalks could do it here.