An epic story on the life and death of Superdive 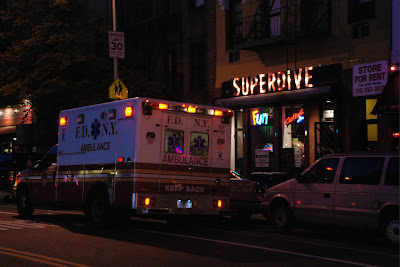 Sarah Laskow files a detailed piece at Capital titled "Fast times on Avenue A: The life and death of Superdive."

LONGTIME VILLAGERS OFTEN TALK ABOUT the change in their neighborhood as synonymous with the rise of bars and restaurants that create street traffic and noise unlike that in any other neighborhood. Words and phrases like rowdy, circus atmosphere, zoo are used to describe the street scene at night. When bar owners and nightlife operators argue that the East Village has always been a nightlife destination, they respond: Yes, but. Something’s different now.

Academics have a word for what the neighborhood has become: a nightscape. Bars and restaurants were once peripheral to the main drag's primary economic drivers: supermarkets, coffeehouses, boutique shops, record stores. But in post-industrial cities, nightlife has grown into an industry in its own right. As in any industry, shop owners tend to cluster. A century ago, that meant the creation of a Garment District. Now it means the creation of a Party District.

Superdive was self-conscious, though. It promised not just beer or a dance floor, but an experience directly targeted at a crowd the East Village had perhaps hoped it hadn't overtly been catering to: Not some group of characters out of an old Lou Reed song, so much as the group of characters you'd find on Bourbon Street, or worse, North Avenue in White Plains. There was some irony in the marketing of Superdive, but not much.

“Superdive made a lot of us into activists,” Dale Goodson, 58, said recently.

Read the whole shebang here.
Posted by Grieve at 10:07 AM

excellent piece, sums it right up.

sure there were lots of bars.
not as many as today.
they were inhabited by mostly neighborhood people that knew each other. neighbors.
the customers were older and more respectful in their behavior. and the bars served free cold cuts, bread, mustard and pickles.
even the down and out drunks were quieter. maybe because they got to eat.
the young folks today are going deaf from the volume of their Ipods, concerts, etc. and they have this great need to be looked at.
even the psychedelic clubs of the 60s didn't disrupt the way clubs do today.

I think she did a nice job with this article. One part I don't agree with is this idea that bars and restaurants make the streets safer. I think they make people feel safer, but not actually safer. The block I grew up on in Queens has no retail business and it is very safe.

If indeed it is true that they make the streets safer, what is the density threshold where the streets go from unsafe to safe - how many bars does it take? Alternately, I think bars attract a different kind of crime (ie bar fights, date rape) and police activity.