A tin ceiling and Vermont veal meatballs for Goat Town

The Times had an update last week on Goat Town, the new restaurant taking over the former Seymour Burton-Butcher Bay space (Le Tableau closed in December 2007) on East Fifth Street between Avenue A and Avenue B:

The restaurant will hew to the current shoestring restaurant formula of repurposed materials, including a weathered copper bar and a tin ceiling, and ingredients that are often local, perhaps even grown in the restaurant’s own garden, and pickled on the premises. The menu is fairly straightforward American, with a raw bar, and dishes like Vermont veal meatballs, seared Block Island swordfish, and braised Flying Pigs Farm pork shoulder.

Nicholas Morgenstern, late of General Greene in Fort Greene, and Joel Hough, a former chef de cuisine at Cookshop, are behind this venture.

I caught a look inside the other day... 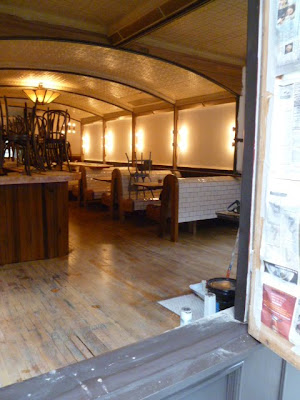 Goat Town opens Thursday.
Posted by Grieve at 6:25 AM

Looks nice but with all that tile and no fabric, be prepared for a very loud scene in there.

...not to mention the arched ceiling. Loud indeed. And those booths do not look comfortable.

makes one long for poliana.

I was standing outside Sophie's on Saturday early evening and looked in this place quickly. As I was walking back a guy went in and I asked when they opened. In a pretty dickish and dismissive way he said Wednesday and I wished him luck, and I still can't figure out why. It's the first time I was offended by a restaurant employee before they even opened.

Simple, you didn't fit his pretentious demographic. Fuck him and who cares, he'll be bussing somewhere else in a few minutes after this place closes.
I got the same vibe from another bar on 2nd (Scoolbrod) before they opened and never went in when the owner gave me a similar attitude.

I don't understand why restaurants open with such attitude. It really goes against what they are trying to do. Serve Food to the Masses. I'll check it out in a few weeks and see how it is. Maybe the attitude will be lifted.

I tried to go into Diablo Royale when they first opened, within a day or two. It was around 5pm, must have been the middle of the week, and it was empty save a couple people having a drink. I wanted to see what it looked like, see the menu, decide if it was something to come back to, see the infamous backyard. I tried to walk in the door and I was stopped, asked what I wanted. I was not asked if I wanted a seat, or some food, or a drink, just what did I want. I mumbled something about looking and felt intimidated by the waiter physically blocking me from going any further. Needless to say, they turned out to be exactly what I experienced.

Back in the summer, Mrs. Grieve was waiting for me outside while I was in Whole Earth on St. Mark's ... she wanders over to look at the window of that Bao/DOB place. No one was inside. She asked if they had a menu that she could look at. "WE DON'T DO FOOD TO GO!" the hostess or manager yelled. She said that she wasn't going to order anything to go, that she just wanted to see a menu. "WE DON'T DO FOOD TO GO!" We never wouldn't have eaten there anyway... still...