Earlier today, we talked about the construction on East First Street between Avenue A and First Avenue...and how that might impact the cab-heavy business at Punjabi Grocery & Deli.

I was unaware of the extent of the infrastructure changes planned on East Houston from the Bowery to FDR ... So many thanks to a reader for sending along the plans... I'm still sorting through them... but the area on East First between A and First Avenue will see significant changes... see the plans for yourself.... 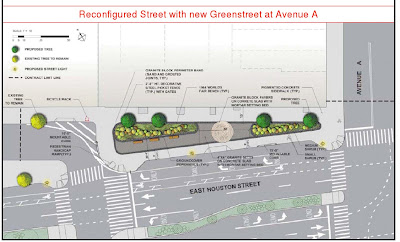 Vehicles will no longer be able to enter First Street right off Houston at Avenue A (a dangerous intersection, if you ask me...) mostly because they'll be a greenstreet ... There's a similar greenstreet planed for Avenue D...

Work is expected to be completed by the summer of 2013. 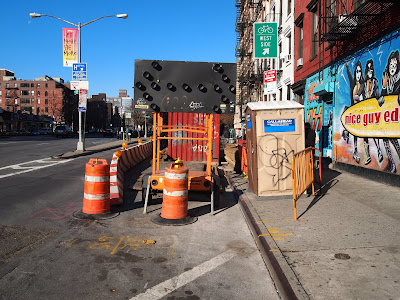 Looks like they're going to eliminate a few parking spots on 1st street as well. I've spent many mornings fighting for those spots right after the street cleaner comes through around 8:30 AM. The guys who work at Katz's are always parking there.

This constuction has kinda screwed up my whole parking system, but cars do go too fast off of Houston onto 1st, so it's an improvement in the long run.

People with cars should shut up

People with cars are ok but I couldn't deal with the insane parking in manhattan, I tried for 6 weeks once. What annoys me to no end is how that little park at 1st and Houston was privatized by Veselka, so if veselka isn't open the park is closed and locked tight.

nygrump you are right about the park. It seems really unfair. I remember when it was all wide open and I could walk from the west off 1st St, cut through the park and go into the subway. Now I have to walk around.

Slightly OT, but whatever happened to Natividad Zirate, the homeless bicycle repair guy on Houston/2nd Ave featured in this article: http://www.dnainfo.com/20100803/lower-east-side-east-village/homeless-handyman-fixes-bikes-on-cheap-for-lower-east-siders

Natividad Zirate finished his Ph.D. thesis titled "Cultural Mores of Post-Industrial Disaffected Youth" and subsequently earned his doctorate in Sociology. He only pretended to be homeless as part of his research (yes, I'm kidding).

Veselka did not privatize the park. Residents worked hard to get that corner turned into a safe public amenity! I live on 1st Street and Veselka is the third and BEST vendor in the Kiosk in the park. They pay a hefty licensing fee to the Parks Department for the privilege. I can't believe someone is complaining about walking a few extra feet when we have such a great community space.

I was walking by Veselka park this afternoon.
I happened to look up and noticed that under the USA flag there was flying the POW MIA flag.
I thought that was a little odd. Is that like an official Park Dept thing?