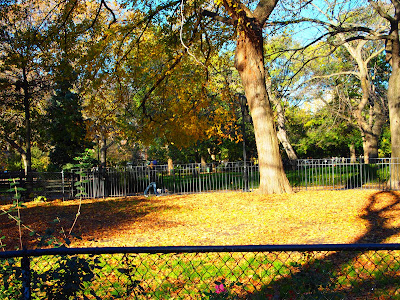 The Times real-estate section has a "Living Around — Tompkins Square Park" feature today titled Grit, Glam and Green, in One Vibrant Package. Here are a few passages:

Susan Stetzer, the district manager of Community Board 3 and an East Village resident since 1970, said the park had attained a state of relative quiet, aside from complaints about the handful of “very loud” concerts it hosts throughout the year.

“There’s no issues there,” Ms. Stetzer said. “We have a big playground that was renovated very, very recently. It’s very nice. The park is well used. We have a rat problem, but so does a lot of the rest of New York City.”

Speaking as a resident rather than as a district manager, she described something bittersweet about having witnessed the slow gentrification of the park. The playgrounds — there are actually three — are shinier and more colorful than when she used to take her son there in the late ’70s and early ’80s. But, she said, they loved the park then, too, and that era had its advantages.

“It was a much stronger, much closer community then,” Ms. Stetzer said. “Everyone knew everyone, and they weren’t necessarily people like you.”

Yes of course and you can walk into TSP and buy a bag of dope in 5 minutes any day of the week .....and if you want to have some real fun there are all manner of fools in TSP with gadgets and bags to hit and rob , then run and play hide-and- seek .

this article imagines that there's no longer an element of danger in the park.

wow, who knew teaching yoga was so materially lucrative? i'm in the wrong business

a rat "problem" is putting it mildly.

@Tom True! I came across what I would describe as a "swarm" of rats the other night.

I guess MS. K likes it so much maybe she will invite jewels and company around for thanksgiving after all it's better to give something back ....

Wait. Where? How? For the last six or so years, I've assumed that anyone semi-publicly selling in the park is a cop. Drats. I figure it's all handled by beepers and runners now. Wait. Are you talking pot or heroin? Hmmm. I'm confused. I live by the park and I see a certain amount of drug running here and there but I just don't notice too much in the park. OTOH, I don't hang out with the junkies. I do see plenty of junkies and I guess they must be able to buy with ease. Wait, you're joking and it's all phone messaging and FedEx deliveries now and I'm completely out of it? Or what?