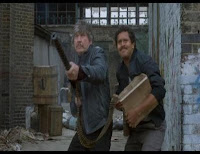 Even as New York City's overall crime rate drops for the 22nd straight year, murders, rapes and robberies are all on pace to show increases.

The New York Police Department and many outside experts say this one-year spike in violent crimes is well within natural statistical fluctuations.

Eli Silverman, a professor emeritus at John Jay College of Criminal Justice and co-author of a study challenging the accuracy of the NYPD's statistics, has a different explanation. He believes the police department is manipulating statistics by downgrading many property crimes to minor offenses that don't show up in the official crime rate. Violent crimes are much harder to downgrade and may be being reported more accurately, he says.

The NYPD denies this practice. Meanwhile, this revelation will likely mean the appearance of a "bad old days are here again" trends piece!

Previously on EV Grieve:
The "bad old days" are here again story of the day

And in other news, rain is made of water!