As we learned last week, artist Angel "LA II" Ortiz added his personal touch to the Joe Strummer mural on Seventh Street and Avenue A... 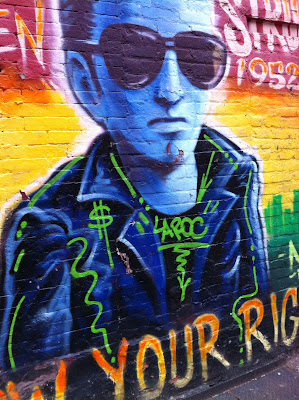 Since then, the mural has been touched up... 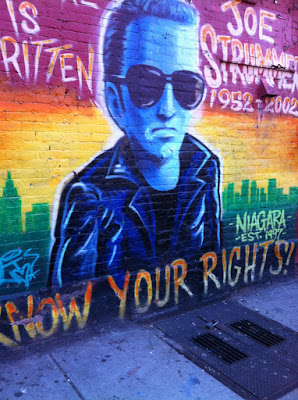 It has been a busy time for Ortiz, a veteran artist who once worked with Keith Haring. NYC the Blog has more on Ortiz here. Meanwhile, DNAinfo reported last week that the NYPD arrested Ortiz for tagging a building on Second Avenue ... the night before the LES native's opening at his show at the Dorian Grey Gallery on East Ninth Street.

Anyway, you've probably seen his LA ROC tag around a lot of late... I counted 12 before I stopped... 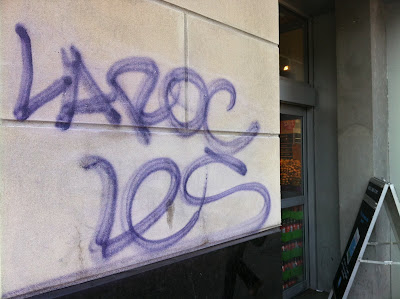 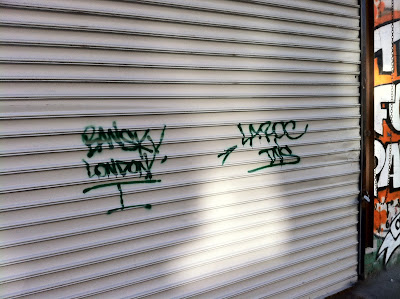 Just wondering who tagged "Bansky" in the last picture? An unfortunate misspelling or is Banksy's alter ego running around the EV??

I noticed someone tagged the Chico good earth mural at E. 10th & 1st Ave. People who tag other artists' work are not graffiti artists; they're just a-holes.

I agree with you Stedman, I don't see any "art" in mucking up someone else's work. Cheap way to get publicity.

And he paid dearly. Two arrests in one week.

Huh...
I'm surprised it's actually him. I always figured it was just some impostor being "conceptual".
it was exciting and even beautiful back in the 80's. Sure is lame and boring as shit looking, now.

Yes but it's ok to 'tag' someone's property, store, window, etc..just not someone else's graffiti. Why not justify 'tagging' someone else's clothing while you're at it. What a bunch of hypocritical, unthoughtout asses.

Thank you, OWR. Queue all of the people arguing that they never claimed that tagging is ok...right...

You're welcome, Jeremy. The number of poseurs/wannabees here is pathetic. I guess that's a metaphor for life, huh?

You shouldn't refer to the guy as a street artist. He's a vandal, uglying-up the neighborhood with his shenanigans.