Inside the homes of two East Village chefs 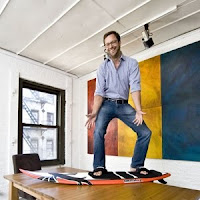 [T]he artwork that’s now occupying most of Frauneder’s time are the sketches of the outdoor space at Edi & the Wolf. He hopes to turn the space into a 35-seat “wine garden” this spring, with special “hyper-seasonal” tasting menus to be offered Thursday to Saturday.

“That rustic feeling inside will translate into the back yard,” he says. As will the tenor of the restaurant — one based on the heuriger’s casual, all-embracing approach.

“That’s the spirit of the East Village, too,” Frauneder says. “Where the politician sits next to the truck driver. Where they can eat something simple but good.”

And from the Morgenstern piece... he has a desiccated wasp nest in his apartment and he describes the communal area behind his East Third Street apartment as "an East Village version of 'Melrose Place.'"

[Frauneder photo by Zandy Mangold via the Post]
Posted by Grieve at 8:59 AM

Where does the guy on 3rd street keep his "many cars"?

EV restaurants that cater to both truck drivers and politicians have gone the way of Leshko's in order to make way for hyper-seasonal wine gardens. And it's very questionable that truck drivers would be able to afford to eat in the EV these days, or that they'd even want to.

A friend who lives around the corner tried to eat at Edi & Wolf a few weekends ago. She was told there was a 90-minute to two-hour wait. And the hostess (or whomever) wouldn't even take her name for a table later! No one in the place at the time appeared to be from the neighborhood. They were catering to the foodie types... I never understand why more places like this don't try to cater to locals... because after the foodies find the next new thing, who's left to eat here?

More like a 35-seat "woo garden". BTW I consider myself a foodie who, thanks to my half-German heritage, is interested in Austrian/Swiss-type food, which Edie is supposed to have. But when I checked their menu there was literally nothing interesting to me on it, hyper-seasonal" be damned.