Marking the 100th Anniversary Of the Triangle Shirtwaist Fire 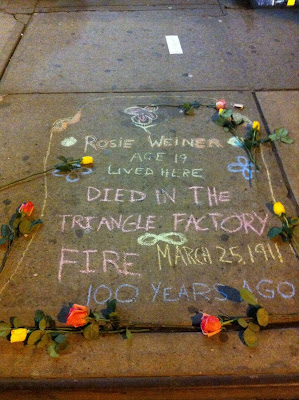 The Triangle Shirtwaist Factory fire in New York City on March 25, 1911, was the largest industrial disaster in the history of the city of New York, causing the death of 146 garment workers who either died from the fire or jumped to their deaths.

Here's a chalk memorial of a young victim from the 1911 fire on St Mark's Place near Avenue A.

CNN has more on the fire here. NY1 said they'd have updates on the anniversary throughout the day.
Posted by Grieve at 10:33 AM

There's another one of these chalk memorials at 89 7th St for Rachel Grossman, age 17.

And I saw a few on E 13th between Aves A and B this morning.
Sad anniversary.