South Brooklyn Pizza is on the April CB3/SLA agenda. They're expanding to open a restaurant next door at 122 First Ave. in the former Ruben's space. (Eater first noted this takeover last September.) They're asking for a beer-and-wine license.

And so the South Brooklyn Pizza folks are collecting signatures of support, as the sign in the window shows... pointing out they are "going in front of the infamous community board three." 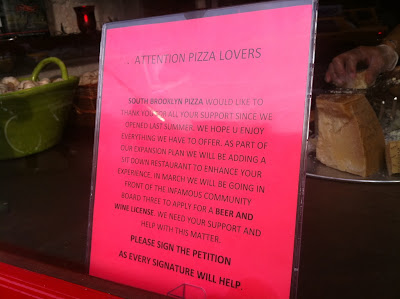 One neighbor said that South Brooklyn Pizza will also be looking to open an outdoor space. There was opposition to a liquor license for the new pizza place last June.

Previously on EV Grieve:
Opposition to South Brooklyn Pizza's liquor license
Posted by Grieve at 6:53 AM

They asked me to sign and I remembered signing for Souen and how they fucked me and the other tenants over so I said no, its not in my interest. I can buy beer in a deli if I need it.

their pizza is great but as an east village resident i am completely against this. i dont care if they serve golden pies with silver and bronze peperoni on top, we need LESS bars and restaurants, not MORE.

I think the real problem would be an outdoor space, most likely meaning the back area that faces so many tenants would become an outdoor bar open until 4am. This has been happening a lot in recent years and once a backyard opens, there is little you can do about any noise problems.

Love their pizza, if not their prices, but is that really a good approach? To vilify the community board which businesses might find "infamous" but residents find, if anything, far too accommodating to bars and restaurants?

The FCC was created in order to prevent radio signals from overlapping and broadcast interference, NOT to regulate program content and language spoken on air.

Likewise, the State Liquor Authority is supposed to issue liquor licenses to qualified applicants, reserving the right to rescind licenses based on illegal behavior by licensees.

This issue is getting out of hand -- selling beer or wine at a pizzeria doesn't make a pizzeria a bar!! It happens that I don't drink, but if I did, I'd be DAMNED if I'd allow my right to sip ANY beverage ANYwhere to be interfered with by a group of unelected "quality-of-life" nazis!!!!

right on chris.
try liveing on a block filled with bars whose customers are the scream and barf crowd that keep you up all night.
smile when people standing next to each other smoking outside the bars (it's still legal, isn't it?) "talking" as loud as if they were blocks away from each other.
or the group singing at 3-4am as they leave the bars or travel to another.
you really have the nerve to claim that your right to sip a beer is more important?
fuck everyone's rights, yours are paramount.
you must be a great neighbor

Why not give a business the benefit of the doubt? I suppose all businesses with alcohol are evil. Let them prove that they're bad neighbors and then take action. That's Chris's point here.

Your claim is hinged on the point that people are loud and suck to have around. If you feel that way, move to a suburb.

That's right! Just because alcohol causes drunkeness at other establishments doesn't mean it will here. Our neighborhood needs *more* late-night bridge-and-tunnel partiers, not less. That's what makes the East Village live up to its radical heritage.

Nice point. So, should we outlaw matches and lighters because some people are careless and might cause forest fires?

Your remarks are highly insulting to responsible drinkers who DON'T act like assholes on our streets.

As for those who do, irate residents have every right to dump shit on their heads.

unfortunately we can't outlaw stupidity. carelessness is not yet a crime. accidents happen.

i was not commenting on all drinkers, only the obnoxious assholes that come down here to party because they probably can't behave the way they do where they live(d). that does not mean all drinkers are obnoxious.

and just because many bikers ride - with pride - in all the lanes except the "restrictive bike lane", in all directions (not safe for themselves or others) does not mean that the bicycle is an evil vehicle and bikers should not be protected.

courtesy and respect are no longer acceptable behaviors. that's for "other non-hip people". the right to be loud, intensive, and violent seems to be the tone of today. and anything goes for a buck.

Please no Brooklyn bashing. We all talk about the good old days but for us Brooklynites--we have always been trashed and someone on this blog even called us carpetbaggers. A simple point..Brooklyn pizza really rocks--the drippy, cheesy slice that drips orange oil and gives a char to the roof of the mouth upon eating. The best Brooklyn pizza came from a place on Flatbush Avenue I don't recall and of course Antonio's Pizza in Park Slope always rocks.

Chris and others who think this crew should be able to sell beer and wine should get the facts straight.

This crew comes to the neighborhood and applies to CB 3 for a full liquor license, wants to serve booze until 4 am, is going to host parties and have tables in the back (which is a residential courtyard) where they will serve pizza and shots, and admit there are 28 full liquor licenses within 500 feet.
So CB 3 denies this place based on all the reasons noted above plus the fact that supporting a license for this place would be unfair to all the other pizzerias in the neighborhood that either have no license or are approved for beer and wine only.

Hmm - so what do they do - they say "fuck-you" to the community including residents who live right above and next door and go to the State SLA to try and secure their license anyway. Residents have to take time off from school and work in the middle of the day to go to 125th street and once again explain why this pizza shop shouldn't get a full bar. All this instead of just agreeing to a beer and wine license.  But why would they do that - their pizza is so great and so special that they need to be able to serve martini's al-fresco to accompany some flour, sauce and cheese. We won't know what we are missing until we have one of their slices with a nice bourbon on the rocks.

Now they want to come back and ask for a beer and wine license - you gotta be kiddin me. Get a slice from Muzzarella, Stromboli, Nino's, Sal's, anywhere but from this obnoxious, pretentious, audacious bunch.