Whatever was in the Avenue A Sushi place is now closed

Avenue A Sushi between Seventh Street and Sixth Street closed last year around this time... After several weeks, the renovated space reopened in April... as either Avenue A Sushi or G2 Kurosawa — never did figure that out...

Anyway! A reader had noted that the place looked closed of late... I was waiting for confirmation from management when this sign appeared yesterday... 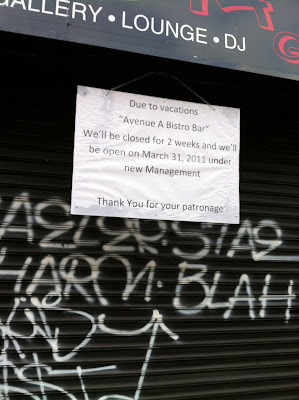 And who knew they were called Avenue A Bistro Bar now? The original Avenue A Sushi opened here in 1983.

A scene outside Avenue A Sushi Bar/G2 from last September: 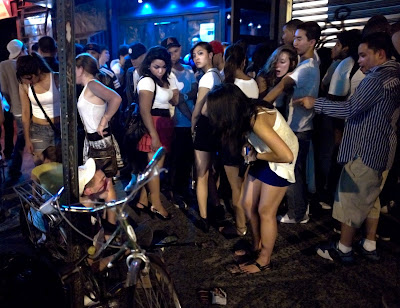 Bob Arihood, who took this photo, noted that the line went north to Seventh Street, and then west on Seventh Street... When RyanAvenueA asked management what the line was for, they responded later "What line?"
Posted by Grieve at 6:43 AM

Email ThisBlogThis!Share to TwitterShare to FacebookShare to Pinterest
Labels: Avenue A Sushi, East Village, restaurants that are now closed

Is the young lady in the foreground interviewing the bicycle who usually resides on Avenue C? I wonder if she was asking him his thoughts on the upcoming snow storm season.